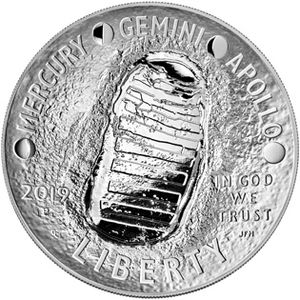 Obverse of the five-ounce silver dollar

The Apollo 11 50th Anniversary commemorative coins were issued by the United States Mint in 2019, commemorating the first landing on the Moon by Apollo 11 astronauts Neil Armstrong and Buzz Aldrin in 1969. Consisting of a gold half eagle ($5 coin), two different sizes of silver dollars, and a copper-nickel clad half dollar, each of the four was issued in proof condition, with all but the larger silver dollar also issued in uncirculated. The gold coins were struck at the West Point Mint, the silver at Philadelphia and the base metal half dollars at the Denver Mint and San Francisco Mint.

All four coins have the same design. The obverse depicts a bootprint on the lunar surface, based on a photograph taken by Aldrin. That design is by Maine sculptor Gary Cooper, with engraving by Joseph Menna of the Mint. The reverse, as mandated by Congress, depicts the visor and surrounding helmet of Aldrin's space suit, with Armstrong, the U.S. flag and the Apollo Lunar Module Eagle in the reflection. This is based on a well-known photograph taken by Armstrong, and was created and engraved by Phebe Hemphill of the Mint. The depiction of Aldrin made him the seventh individual to appear on a U.S. coin who was alive at the time the coins were struck.

The issued coins are curved, so that the obverse is concave (like the inside of a cup) and the reverse is convex (like its outside). Prior to the coins going on sale on January 24, 2019, there was anticipation that like the previous U.S. issue of curved coins, the 2014 National Baseball Hall of Fame issue, the coins might quickly sell out. This did not prove to be the case, and none of the coins has yet met its sales limit. They are due to go off sale after December 31, 2019.