Kids Encyclopedia Facts
This page is about the general topic. For the first crewed Moon landing, see Apollo 11 and Apollo program. 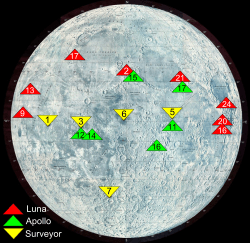 To date, the United States is the only country to have successfully flown manned missions to the Moon. The last mission was in in December, 1972. 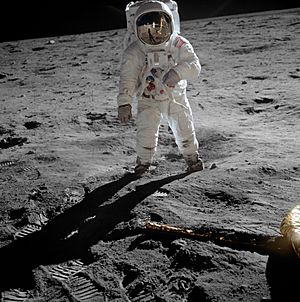 Buzz Aldrin as photographed by Neil Armstrong on the moons surface.

Apollo 11 was the first flight to send people to the moon. It was done by NASA, the American space group. It went up to space on 16 July 1969, carrying three astronauts: Neil Armstrong, Buzz Aldrin and Michael Collins. On 20 July 1969, Armstrong and Aldrin became the first humans to land on the moon, while Collins stayed in orbit around the Moon.

The flight was part of the Space Race. It finished the plan set by John F. Kennedy in 1961 to "land a man on the moon, and return him safely to the Earth", before the 1960s ended.

All content from Kiddle encyclopedia articles (including the article images and facts) can be freely used under Attribution-ShareAlike license, unless stated otherwise. Cite this article:
Moon landing Facts for Kids. Kiddle Encyclopedia.