Jessica Ulrika Meir (IPA: M-eer; born July 1, 1977) is an American NASA astronaut, marine biologist, and physiologist. She was previously Assistant Professor of Anesthesia at Harvard Medical School, Massachusetts General Hospital, Boston, following postdoctoral research in comparative physiology at the University of British Columbia. She has studied the diving physiology and behavior of emperor penguins in Antarctica, and the physiology of bar-headed geese, which are able to migrate over the Himalayas. In September 2002, Meir served as an aquanaut on the NASA Extreme Environment Mission Operations 4 (NEEMO 4) crew. In 2013 she was selected by NASA to Astronaut Group 21. Meir launched on September 25, 2019, to the ISS onboard Soyuz MS-15, where she served as a flight Engineer during Expedition 61 and 62. On October 18, 2019, Meir and Christina Koch were the first women to participate in an all-female spacewalk.

Meir was included in Time magazine's 100 Most Influential People of 2020.

Jessica Meir was born in Caribou, Maine, to a Swedish mother who was a nurse and an Israeli father of Sephardic Jewish (Iraqi-Jewish) descent, who worked as a physician. Her mother is from Västerås, Sweden; her father was born in Iraq and moved to Israel as a child. After taking part in the Israeli Independence War (1948 Arab–Israeli War), he later moved to Sweden where he met Meir's mother who grew up in a Christian family. The couple moved to Maine, US where Meir was born. Although her mother did not convert to Judaism, Meir identifies as culturally Jewish, attended synagogue while growing up, and had a Bat Mitzvah.

She was inspired to venture into space after watching the Space Shuttle missions on television. Meir knew no one who worked for NASA or for the space program. She attributes her abiding dream of personally participating in space exploration to the love of nature she learned from her mother, and from her father's predilection for wandering and adventure. "And it might have had something to do with the fact that the stars shone so brightly in rural Maine", Meir added.

Meir earned a Ph.D. in marine biology in 2009 from the Scripps Institution of Oceanography for research on the diving physiology of emperor penguins and northern elephant seals. Meir performed field work at Penguin Ranch on McMurdo Sound in Antarctica to study the diving abilities of the emperor penguin while scuba diving alongside them under the ice. She also studied elephant seals while they were diving in the Pacific Ocean off Northern California.

Meir did post-doctoral research at the University of British Columbia, raising bar-headed geese so their tolerance of high altitude and low oxygen levels during flight over the Himalayas could be studied in a controlled environment. For the 2012 academic year she continued her research as an assistant professor of anesthesia at the Harvard Medical School/Massachusetts General Hospital and then took a leave of absence to enter the astronaut corps. 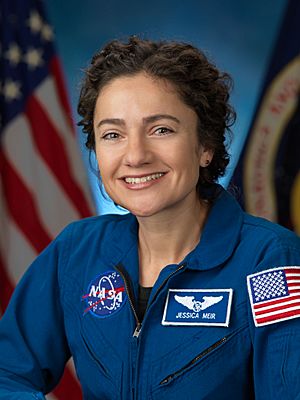 After getting her master's degree, Meir worked from 2000 to 2003 for Lockheed Martin Space Operations as an experiment support scientist for the Human Research Facility at the NASA Johnson Space Center (JSC) in Houston, Texas. Meir coordinated and supported human space life science experiments that were performed by astronauts on Space Shuttle and International Space Station (ISS) missions. These experiments included physiological studies (bone loss, muscle control/atrophy, lung function, etc.) to determine if any bodily processes were altered in the spaceflight environment. Meir guided these experiments through the necessary review cycles, developed procedures that the astronauts would use on-orbit, trained crew members, and provided ground support in the Mission Control Center while the astronauts were performing the experiments on the shuttle or ISS. 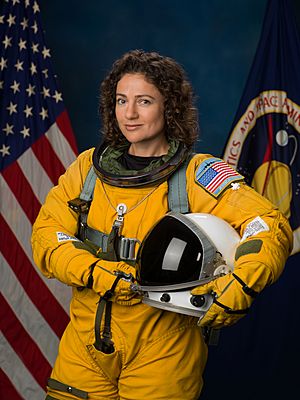 In September 2002, Meir served as an aquanaut on the joint NASA-NOAA NEEMO 4 expedition (NASA Extreme Environment Mission Operations), an exploration research mission held in Aquarius, an undersea research laboratory four miles off shore from Key Largo. Meir and her crewmates spent five days saturation diving from the Aquarius habitat as a space analogue for working and training under extreme environmental conditions. The mission was delayed due to Hurricane Isadore, forcing National Undersea Research Center managers to shorten it to an underwater duration of five days. Then, three days into their underwater mission, the crew members were told that Tropical Storm Lili was headed in their direction and to prepare for an early departure from Aquarius. Fortunately, Lili degenerated to the point where it was no longer a threat, so the crew was able to remain the full five days.

At the time of NEEMO 4, Meir was leaning toward pursuing a PhD in a field related to evolutionary biology and/or life in extreme environments (astrobiology). She was also fascinated by marine biology (which suited the NEEMO mission well), and hoped to coordinate a specific topic of study to combine these main interests. She received her PhD in marine biology from Scripps Institution of Oceanography, studying diving physiology, in 2009.

Meir is a member of the science advisory board of Adventurers and Scientists for Conservation.

In April 2019 NASA announced that Meir had been assigned to the crew of International Space Station Expedition 61/62 as flight engineer, scheduled to launch aboard Soyuz MS-15 alongside Roscosmos cosmonaut Oleg Skripochka and MBRSC astronaut Hazza Al Mansouri, who would fly a short duration mission and land with the crew of Soyuz MS-12 eight days after launch. 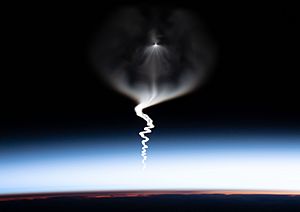 Soyuz MS-15 photographed from the ISS during launch.

Meir, Skripochka and Al Mansouri launched aboard MS-15 on 25 September 2019, marking the final flight of the Soyuz-FG rocket and final launch from the Gagarin's Start launch pad, both of which were retired following launch of Soyuz MS-15. The crew successfully reached orbit and rendezvoused with the ISS only six hours later. Soyuz MS-15 docked to the ISS at the very end of Expedition 60, meaning it marked an unusual period on the station where there were nine people aboard. The reason for this was to allow for Al Mansouri's flight, in which he became the first person from the United Arab Emirates to fly in space. Expedition 60 ended on 3 October 2019 when Al Mansouri, alongside Soyuz MS-12 crew members Aleksey Ovchinin and Nick Hague undocked from the station and returned to Earth, returning the ISS to normal six-crew operations during Expedition 61. 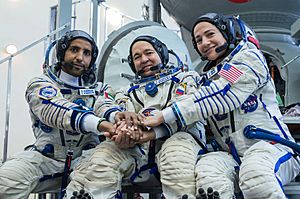 During Expedition 61 Meir was scheduled to perform three spacewalks during this mission to help install new lithium-ion batteries on the Port-6 truss structure of the ISS, although this schedule was later changed. On October 18, 2019, Meir performed her first spacewalk alongside her colleague Christina Koch, replacing a faulty Battery Charging Discharging Unit. The unit had unexpectedly failed to activate, preventing the station's newly installed lithium-ion batteries from providing additional power. The three other scheduled spacewalks scheduled to install the new batteries had to be postponed in order to perform this spacewalk. The spacewalk lasted seven hours and 17 minutes, and was the first all-female spacewalk in history. During the spacewalk US president Donald Trump called and spoke to the astronauts in recognition of the historical significance of this event, being corrected by Meir after mistakenly announcing the event as the first time a woman was outside the space station. 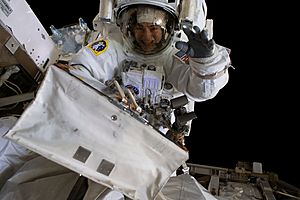 Jessica Meir during her EVA on October 18

On 6 February 2020 Koch, alongside Soyuz MS-13 crew members Aleksandr Skvortsov and Luca Parmitano returned to Earth, following which Meir, Skripochka and Andrew Morgan transferred over to Expedition 62, due to delays with NASA's Commercial Crew Program, most of this increment was spent as a crew of three. During the final eight days of the Expedition, the crew was joined by the three person crew of Soyuz MS-16, Russian cosmonauts Anatoli Ivanishin and Ivan Vagner joined by NASA astronaut Christopher Cassidy, who launched and docked to the station on 9 April 2020. Although their time as a six-person crew was short, the expanded Expedition 62 crew made the most of their time together, conducting experiments on how muscles react to long duration spaceflight as part of NASA's Muscle tone in space (Myotones) experiment. On 13 April Meir and Cassidy, both Maine natives, participated in a live conference with several students from around Maine; the two, joined by Andrew Morgan, also participated in a segment of Some Good News, an internet show hosted by American actor John Krasinski to spread good news during the COVID-19 pandemic. 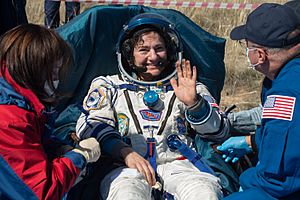 On 17 April 2020, Meir, joined by Skripochka and Morgan, returned to Earth aboard Soyuz MS-15, wrapping up a 205-day spaceflight for Meir and Skripochka and returning Morgan from a 272-day flight. The Soyuz capsule touched down near the town of Dzhezkazgan, Kazakhstan, at 11:16am local time. The departure of the three crew members signaled the start of Expedition 63, commanded by Cassidy, which would see the arrival of the SpaceX Crew Dragon Demo-2 mission, the first crewed spaceflight to launch from American soil since STS-135, the final flight of the Space Shuttle program in 2011.

Astronauts are allowed to bring a number of personal items to the International Space Station, and two among Meir's choices were an Israeli flag and a pair of novelty socks with Stars of David and menorahs. Most of Meir's relatives from her father's side reside in Israel. Meir has visited Israel twice: the first time as a teenager with her parents and her brother, and the second time in 2016 for work as an astronaut where she gave a talk in Haifa at the International Space University summer session. Among other things, she also took pictures of Israel from space.

Meir has received numerous awards including:

All content from Kiddle encyclopedia articles (including the article images and facts) can be freely used under Attribution-ShareAlike license, unless stated otherwise. Cite this article:
Jessica Meir Facts for Kids. Kiddle Encyclopedia.