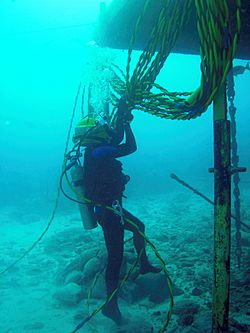 Aquanaut Josef Schmid working outside the Aquarius underwater laboratory in 2007.

An aquanaut is a person who stays at the bottom of the ocean for 24 hours or longer while exposed to the pressure of the water at that depth in the ocean. This usually happens in a special building, called an underwater habitat, on the ocean bottom.

The first person to stay at the bottom of the ocean for 24 hours was a man from France. His name was Robert Sténuit. This happened in September 1962. The United States Navy had a program in the 1960s called SEALAB in which military aquanauts and scientists spent time on the ocean bottom. This program ended in February 1969 after aquanaut Berry L. Cannon died from breathing too much carbon dioxide.

NASA carries out programs in the Aquarius underwater habitat off Key Largo in Florida. These programs are called "NASA Extreme Environment Mission Operations" (NEEMO). The NEEMO programs help teach astronauts how to live and work in outer space.

All content from Kiddle encyclopedia articles (including the article images and facts) can be freely used under Attribution-ShareAlike license, unless stated otherwise. Cite this article:
Aquanaut Facts for Kids. Kiddle Encyclopedia.