María Cristina Estela Marcela Jurado García (16 January 1924 – 5 July 2002), better known as Katy Jurado, was a Mexican film, stage, and television actress, she made 71 movies in her time. Jurado began her acting career in Mexico in 1943. From the 1940s through the early 1960s, the era called the Golden Age of Mexican cinema, Jurado played villainous "femme fatale" characters in Mexican films.

She was the first Latin American actress nominated for an Academy Award, as Best Supporting Actress for her work in Broken Lance, and was the first to win a Golden Globe Award for her performance in High Noon. 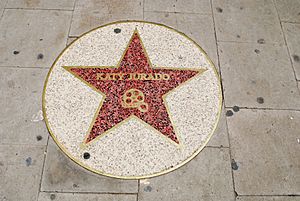 Jurado's first husband was the Mexican actor Victor Velázquez. Marlon Brando was smitten with Jurado after seeing her in High Noon. They met when Brando was filming in Mexico Viva Zapata!.

During the filming of the movie Vera Cruz in México, Jurado met the American actor Ernest Borgnine, who became her second husband on December 31, 1959. Jurado and Borgnine divorced in 1963.

In 1968, she moved back to Mexico permanently and established residence in the city of Cuernavaca. 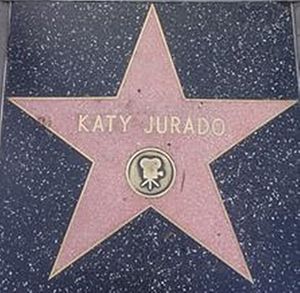 Star of Katy Jurado in the Hollywood Walk of Fame

Towards the end of her life, Jurado suffered from heart and lung ailments. She died of kidney failure and pulmonary disease on 5 July 2002, at the age of 78, at her home in Cuernavaca, Morelos, Mexico. She was buried in Cuernavaca at the Panteón de la Paz cemetery.

Jurado has a star on the Hollywood Walk of Fame at 7065 Hollywood Boulevard for her contributions to motion pictures.

All content from Kiddle encyclopedia articles (including the article images and facts) can be freely used under Attribution-ShareAlike license, unless stated otherwise. Cite this article:
Katy Jurado Facts for Kids. Kiddle Encyclopedia.