Alberto Aguilera Valadez (January 7, 1950 – August 28, 2016), better known by his stage name Juan Gabriel , was a Mexican singer, songwriter and actor. Also nicknamed as Juanga and El Divo de Juárez, Gabriel was known for his flamboyant style, which broke barriers within the Latin music market. Widely considered one of the best and most prolific Mexican composers and singers of all time, he has been called a pop icon.

Having sold over 200 million copies worldwide, Juan Gabriel was among Latin America's best selling singer-songwriters. His nineteenth studio album, Recuerdos, Vol. II, is reportedly the best-selling album of all time in Mexico, with over eight million copies sold. During his career, Juan Gabriel wrote around 1,800 songs, all of them performed by him and many other artists. 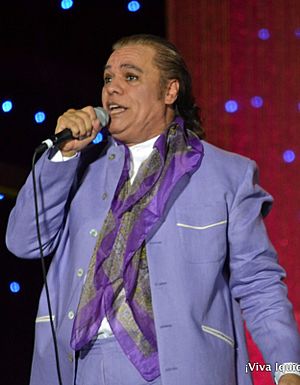 On August 28, 2016, it was reported that Gabriel died from a heart attack earlier that day in Santa Monica, California. Gabriel's body was cremated; his ashes were laid to rest at a house he owned in Ciudad Juárez, Chihuahua, after receiving tributes from the city and Palacio de Bellas Artes in Mexico City. An autopsy was not performed to determine the cause of death.

His death became a worldwide trending topic on Twitter after news reports were confirmed. President of Mexico Enrique Peña Nieto, called him one of Mexico's "greatest musical icons". United States President Barack Obama also commented on Gabriel's death and complimented his music for "transcending borders and generations" and that "his spirit will live on in his enduring songs, and in the hearts of the fans who love him". 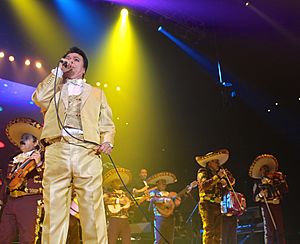 Gabriel did 10 to 12 performances per year as benefit concerts for his favorite children's homes, usually posing for pictures with his fans and forwarding the proceeds from the photo ops to support Mexican orphans. In 1987, he founded Semjase, a house for orphaned and underserved children located in Ciudad Juárez, Chihuahua. It serves school children between the ages of 6 to 12.

In 2015, Billboard listed Gabriel among his list of the 30 most influential Latino artists in history, citing his "dramatic performance style" and his redefined concept of romantic Latin pop music.

He received the Lo Nuestro Excellence Award in 1991. 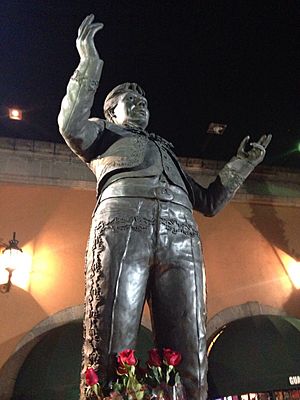 The American Society of Composers, Authors and Publishers (ASCAP) honored Gabriel the Latin Songwriter of the Year Award in 1995, 1996, and 1998.

A statue was erected by Billboard at Mexico City's Plaza Garibaldi in 2001, and remains a popular destination for mariachi performances.

In 2009, the singer was honored as the Latin Recording Academy's Person of the Year. He also received his own star on the Hollywood Walk of Fame in May 2002.

A television series based on Gabriel's life titled Hasta que te conocí, began airing on April 18, 2016 and the series ended on August 28, coincidentally the same day Gabriel died. He was portrayed by Colombian actor Julián Román and Gabriel served as the executive producer.

All content from Kiddle encyclopedia articles (including the article images and facts) can be freely used under Attribution-ShareAlike license, unless stated otherwise. Cite this article:
Juan Gabriel Facts for Kids. Kiddle Encyclopedia.