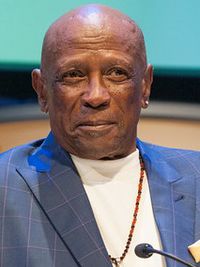 Louis Cameron Gossett Jr. (born May 27, 1936) is an American actor and television producer. He is best known for his Academy Award winning role as Emil Foley in the 1982 romantic drama movie An Officer and a Gentleman. He is also known for his role as Fiddler in the 1977 television series Roots. He also won an Emmy Award and two Golden Globe Awards.

In December 2020, Gossett was hospitalized and diagnosed with COVID-19 in Georgia.

All content from Kiddle encyclopedia articles (including the article images and facts) can be freely used under Attribution-ShareAlike license, unless stated otherwise. Cite this article:
Louis Gossett Jr. Facts for Kids. Kiddle Encyclopedia.