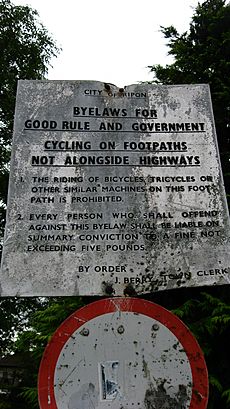 "Byelaws for good rule and government" in Ripon, North Yorkshire

A By-law is a rule made by an organization to regulate itself. Sometimes it is also spelled bylaw or bye-law.

In the United Kingdom, Canada, and some Commonwealth countries, the local laws made by municipalities are called by-laws. This is because the laws are regulated by the central governments.

All content from Kiddle encyclopedia articles (including the article images and facts) can be freely used under Attribution-ShareAlike license, unless stated otherwise. Cite this article:
By-law Facts for Kids. Kiddle Encyclopedia.