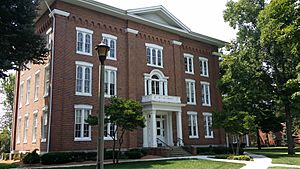 Eureka College is a Christian liberal arts college in the United States. It is in Eureka, Illinois. It was established in 1855. Abraham Lincoln once spoke on the campus of the college in 1856. Ronald Reagan graduated from the college in 1932. In 2010, Eureka College was made a national historic district by the National Park Service.

All content from Kiddle encyclopedia articles (including the article images and facts) can be freely used under Attribution-ShareAlike license, unless stated otherwise. Cite this article:
Eureka College Facts for Kids. Kiddle Encyclopedia.