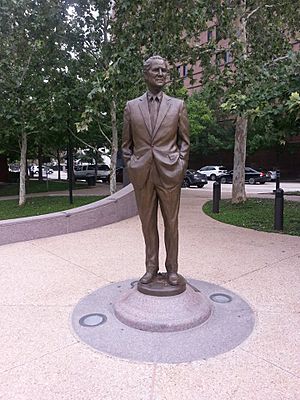 Born in Houston, Baker attended The Hill School and Princeton University before serving in the United States Marine Corps. After graduating from the University of Texas School of Law, he pursued a legal career. He became a close friend of George H. W. Bush and worked for Bush's unsuccessful 1970 campaign for the United States Senate. After the campaign, he served in various positions for President Richard Nixon. In 1975, he was appointed Undersecretary of Commerce for Gerald Ford. He served until May 1976 and ran Ford's 1976 presidential campaign. 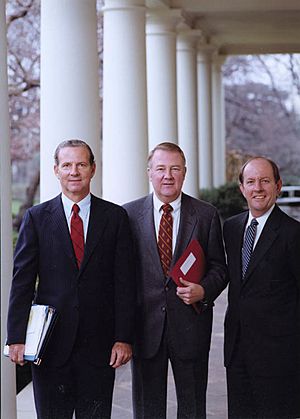 left Chief of Staff James Baker, Counselor to the President at the White House, December 2, 1981

Baker ran Bush's unsuccessful campaign for the 1980 Republican presidential nomination, but made a favorable impression on the Republican nominee, Ronald Reagan. Reagan appointed Baker as his White House Chief of Staff, and Baker remained in that position until 1985, when he became the Secretary of the Treasury. He resigned as Treasury Secretary to manage Bush's successful 1988 campaign for president.

After the election, Bush appointed Baker to the position of Secretary of State. As Secretary of State, he helped oversee U.S. foreign policy during the end of the Cold War and dissolution of the Soviet Union, as well as during the Gulf War. After the Gulf War, Baker served another stint as White House Chief of Staff from 1992 to 1993. Baker remained active in business and public affairs after Bush's defeat in the 1992 presidential election.

Baker is the namesake of the James A. Baker III Institute for Public Policy at Rice University. In addition to the numerous recognition's received by Baker, he was presented with the prestigious Woodrow Wilson Award for public service on September 13, 2000 in Washington, D.C. 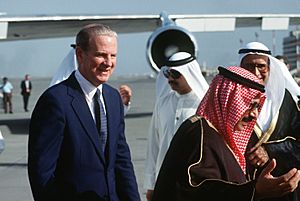 Baker serves on the Honorary Council of Advisers for the U.S.-Azerbaijan Chamber of Commerce.

Baker is a leader of the Climate Leadership Council. In 2017, Baker was a member of a small group of "Republican elder statesmen" proposing that conservatives embrace carbon taxes, as a policy to deal with global climate change.

Baker met his first wife, the former Mary Stuart McHenry, of Dayton, Ohio while on spring break in Bermuda with the Princeton University rugby team. They married in 1953. Together they had four sons. Mary Stuart Baker (Mary Stuart was her full first name) died of breast cancer in February 1970. In 1973, Baker and Susan Garrett Winston, a widow and a close friend of Mary Stuart, were married. Winston had two sons and a daughter with her late husband.

All content from Kiddle encyclopedia articles (including the article images and facts) can be freely used under Attribution-ShareAlike license, unless stated otherwise. Cite this article:
James Baker Facts for Kids. Kiddle Encyclopedia.