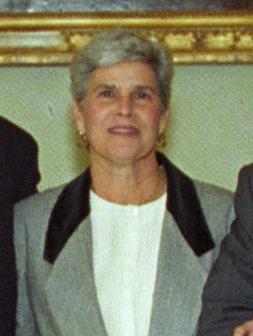 Violeta Barrios Torres de Chamorro (Born October 18, 1929 in Rivas, Nicaragua) is a Nicaraguan political leader and was President of Nicaragua from 1990 to 1996. Her husband Pedro Chamorro, a newspaper editor, was assassinated in 1978. She took over as editor of the paper, La Prenza.

All content from Kiddle encyclopedia articles (including the article images and facts) can be freely used under Attribution-ShareAlike license, unless stated otherwise. Cite this article:
Violeta Chamorro Facts for Kids. Kiddle Encyclopedia.