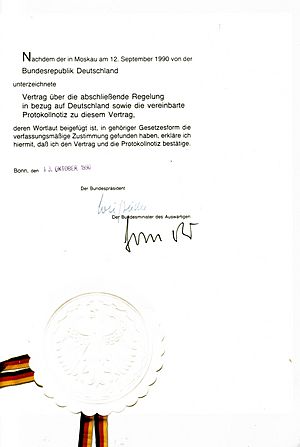 Germany's ratification of the 2+4 Treaty

It was signed by the two Germanys (West and East) and the four Wartime Allies (France, the United States, the United Kingdom, and the Soviet Union (USSR)) on 12 September 1990, in Moscow, USSR.

The treaty formally ended the Second World War. The Allies of World War II gave up the powers and duties they had had in the two Germanys and in Berlin since the Nazi Surrender in 1945 stopped the fighting in World War II.

Six countries signed the treaty but only five ratified (confirmed) it. This is because Germany united under one government on 3 October 1990, three weeks after the treaty was signed.

The treaty allowed East and West German reunification into one country. It said that Germany will be peaceful, and not start wars. Germany promised to limit the size of its Army, Navy, and Air force, and not to make nuclear bombs.

The treaty also set guidelines about moving the foreign troops that were in Germany. The USSR was to move all of its troops out of Eastern Germany and Eastern Berlin by 1994. The three Western allies were asked to keep their troops in Berlin until the Soviets had left. Germany also promised not to allow NATO troops to move into Eastern Germany, and not to allow certain types of weapons in the East either.

The treaty also set Germany's borders, and the German government confirmed that the treaty it made with Poland in 1970 about the border between the countries, was to stay in force.

On 15 March 1991, the treaty treaty took effect, and Germany became fully sovereign (that is, able to control everything in its own territory, including Berlin).

All content from Kiddle encyclopedia articles (including the article images and facts) can be freely used under Attribution-ShareAlike license, unless stated otherwise. Cite this article:
Treaty on the Final Settlement with Respect to Germany Facts for Kids. Kiddle Encyclopedia.