Twenty-fifth Amendment to the United States Constitution facts for kids

The United States Congress ratified (approved) the Amendment on February 10, 1967.

This clause was not very specific. It did not say:

Because the Constitution did not include rules for any of these things, it was not clear what the government should do when presidents died or resigned. 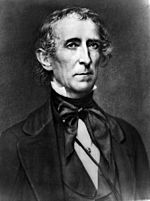 At other times, Presidents did not die, but they were unable to do their jobs because of illness. For example, during his Presidency, Woodrow Wilson had a stroke. However, the First Lady, Edith Wilson, and the official White House doctor kept the stroke a secret. Because of this, no one took over the Presidency, even though Wilson could not do the job at that time.

Before the 25th Amendment, the office of Vice President had been empty eighteen times because the Vice President died, resigned, or had to take over for the President. For example, there was no Vice President for nearly four years after Franklin D. Roosevelt died.

These problems made it clear that the government needed more specific rules.

On November 22, 1963, President John F. Kennedy was murdered. Kennedy's assassination made it very clear to Congress that they needed to figure out a solution about presidential succession right away. The United States was in the middle of the Cold War. The new President, Lyndon B. Johnson, had once had a heart attack. The next two people in line for the presidency were the Speaker of the House of Representatives, John McCormack (who was 71 years old), Congress started moving more quickly. 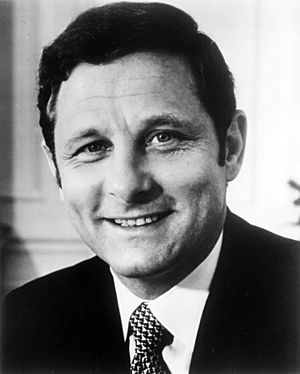 Members of Congress suggested two different amendments to fill in the details missing from Clause 6.

The Keating–Kefauver Proposal suggested allowing Congress to make a law about who should decide when a President is disabled. It was proposed in 1963 by Senator Kenneth Keating of New York, and supported by Tennessee Senator Estes Kefauver. However, other Senators were worried that Congress could abuse this power, or would not actually make the law after the amendment was passed.

The Bayh–Celler Proposal ended up becoming the Twenty-fifth Amendment. On January 6, 1965, Senator Birch Bayh proposed the amendment in the United States Senate, and Representative Emanuel Celler (Chairman of the House Judiciary Committee) proposed it in the United States House of Representatives. Unlike the Keating–Kefauver Proposal, it suggested a way to fill the Vice President's position if it was empty, and also set out rules for how a President could be declared "disabled."pp. 348–350

Section 1. In case of the removal of the President from office or of his death or resignation, the Vice President shall become President.

Section 2. Whenever there is a vacancy in the office of the Vice President, the President shall nominate a Vice President who shall take office upon confirmation by a majority vote of both Houses of Congress.

The Twenty-fifth Amendment in the National Archives 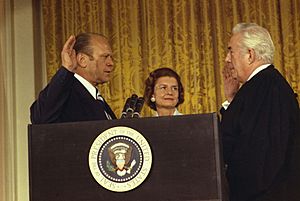 Gerald Ford is sworn in as President after Nixon's resignation

Section 1 made the "Tyler Precedent" a law. It says that if a President is removed from office, dies, or resigns, the Vice President immediately becomes President (not "Acting President").

Before the Twenty-fifth Amendment, if the Vice President's position was empty, it stayed empty until the next election.

Section 4 is the only part of the Amendment that has never been used. It allows other executive officials to declare the President unable to do his job. The Vice President must agree to do this. So must:

To declare the President unable to do his job, these people would have to sign and give a letter to the President pro tempore of the Senate and the Speaker of the House. Like with Section 3, the Vice President would then become the Acting President.

If two-thirds of each House of Congress votes that the President still cannot do his job, the Vice President would continue to be Acting President. If Congress does not vote this way, or if they do not vote at all within 21 days, the President takes over the Presidency again.

The Twenty-fifth Amendment has been invoked (used) six times since it was added to the Constitution. Section 1 has been used once; Section 2 has been used twice; and Section 3 has been used three times. Only Section 4 has never been used, though it was considered twice. 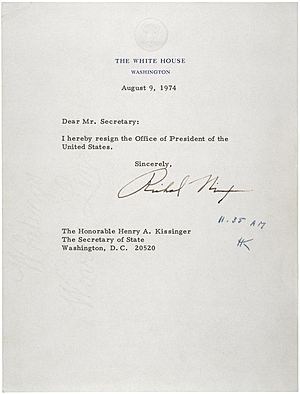 President Richard Nixon resigned on August 9, 1974, before the House could vote on whether to impeach him for crimes related to the Watergate scandal. Vice President Gerald Ford became President as soon as Nixon resigned.

Presidents have used Section 3 of the 25th Amendment three times. Each time, they have given power to their Vice Presidents for a short time because they needed to get anesthesia for medical tests or surgery. The three Acting Presidents in United States history are listed below.

On July 12, 1985, President Ronald Reagan found out that he had a small growth in his colon that could turn into colon cancer. His doctor told him he needed surgery. Reagan decided to have surgery right away.

However, Reagan did not want to invoke Section 3 of the 25th Amendment. He was worried that giving Presidential power away would set a bad precedent. The White House's head lawyer and Reagan's Chief of Staff suggested that he use Section 3 and give power to Vice President George H.W. Bush.

Two letters were created. The first invoked Section 3 and said Reagan would be unable to discharge his duties. The second said that Reagan knew about Section 3, and did not think it applied to his situation, but still wanted Bush to take over during his surgery. On July 13, Reagan signed the second letter and had it delivered to the President pro tempore and the Speaker of the House.

I personally know he did intend to invoke the amendment, and he [communicated] that to all of his staff and ... to the VP [Vice President] as well as the President of the Senate. He was also very firm in his wish not to create a precedent binding his successor.p.197

However, since Reagan did not specifically mention Section 3 and say he could not do his job as President, he did not officially invoke the 25th Amendment.

On June 29, 2002, President George W. Bush became the first President to officially invoke Section 3. He needed a colonoscopy, a test of the colon, and would be getting anesthesia. He formally gave power to his Vice President, Dick Cheney, using the rules that the 25th Amendment set out. Unlike Reagan, he specifically said he was using Section 3 of the 25th Amendment in his letter to the President pro tempore and the Speaker of the House. After about two hours, Bush was awake and took back the Presidency.

On July 21, 2007, President Bush again invoked Section 3 so he could have another colonoscopy. Again, Cheney was Acting President for about two hours, until Bush was ready to take back the Presidency.

Considered use of Section 4

Twice, President Ronald Reagan's staff thought about using Section 4 of the 25th Amendment to have him declared unable to do his job.

On March 30, 1981, a man named John Hinckley tried to kill President Ronald Reagan. Reagan was shot and needed surgery, so he could not invoke Section 3 to give power to his Vice President. His Vice President, George H.W. Bush, did not invoke Section 4, because he was on an airplane returning from Texas. Reagan was out of surgery by the time Bush got to Washington, D.C.pp.195-6, 253-5

In 1995, Birch Bayh, who had written the Senate version of the 25th Amendment, wrote that Section 4 should have been invoked.

1987: Reagan accused of not doing his job

In 1987, Reagan's Chief of Staff, Donald Regan, resigned.p.218 Howard Baker replaced him.p.83 Regan's staff told Baker that Reagan seemed lazy and unable to do his job. They told him to be ready for Section 4 of the 25th Amendment to be invoked.

According to the PBS program American Experience:

What Baker's transition team was told by Donald Regan's staff that weekend shocked them. Reagan was 'inattentive, inept,' and 'lazy,' and Baker should be prepared to invoke the 25th Amendment to [take away] his duties.

In an interview on the program, Edmund Morris, who had written a biography of Reagan, said:

The incoming Baker people all decided to have a meeting with him on Monday, their first official meeting with the President, and to cluster around the table in the Cabinet room and watch him very, very closely to see how he behaved, to see if he was indeed losing his mental grip.

Reagan who was, of course, completely unaware that they were launching a death watch on him, came in stimulated by ... all these new people and performed splendidly. At the end of the meeting, they figuratively threw up their hands realizing he was in perfect command of himself.

All content from Kiddle encyclopedia articles (including the article images and facts) can be freely used under Attribution-ShareAlike license, unless stated otherwise. Cite this article:
Twenty-fifth Amendment to the United States Constitution Facts for Kids. Kiddle Encyclopedia.