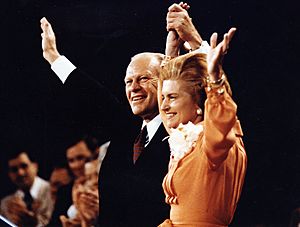 The 1976 Republican National Convention was a United States political convention of the Republican Party that met from August 16 to August 19, 1976 to select the party's nominee for President.

It was held in Kemper Arena in Kansas City, Missouri, the convention nominated President Gerald R. Ford for a full term, but only after narrowly defeating a strong challenge from former California Governor Ronald W. Reagan.

All content from Kiddle encyclopedia articles (including the article images and facts) can be freely used under Attribution-ShareAlike license, unless stated otherwise. Cite this article:
1976 Republican National Convention Facts for Kids. Kiddle Encyclopedia.