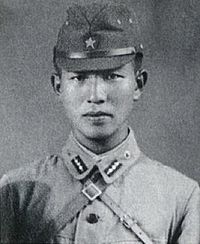 Hiroo Onoda (小野田 寛郎, Onoda Hirō) (March 19, 1922 – January 16, 2014) was an Imperial Japanese Army intelligence officer. He fought in World War II and did not surrender in 1945. After spending 29 years in the Philippines, his former commander traveled there and took him away from duty. His autobiography was, No Surrender: My Thirty-Year War, published in 1974. He was born in Kamekawa, Wakayama Prefecture, Empire of Japan.

Onoda died from heart failure due to complications from pneumonia on January 16, 2014 at St. Luke's International Hospital in Tokyo, Japan. He was 91 years old.

All content from Kiddle encyclopedia articles (including the article images and facts) can be freely used under Attribution-ShareAlike license, unless stated otherwise. Cite this article:
Hiroo Onoda Facts for Kids. Kiddle Encyclopedia.