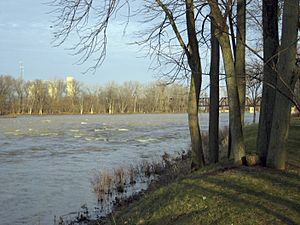 The Maumee River as seen from Grand Rapids

Grand Rapids is a village in Grand Rapids Township, Wood County, Ohio, United States, along the Maumee River. The population was 965 at the 2010 census. Grand Rapids is served by a branch of the Weston Public Library.

Grand Rapids was originally called Gilead, and under the latter name was platted in 1833. A post office called Gilead was established in 1837, and the name was changed to Grand Rapids in 1868. The village was incorporated in 1885.

There were 385 households, of which 33.5% had children under the age of 18 living with them, 47.0% were married couples living together, 12.2% had a female householder with no husband present, 4.7% had a male householder with no wife present, and 36.1% were non-families. 29.1% of all households were made up of individuals, and 12.2% had someone living alone who was 65 years of age or older. The average household size was 2.42 and the average family size was 3.00.

Grand Rapids is the hometown of Robyn Hancock, the 1996 Miss Ohio who represented Ohio in the Miss America contest. She previously held the title of Miss Crestline. The town was also the home of glass sculptor Dominick Labino, whose working studio remains in operation. Congressional Medal of Honor Recipient and Retired Navy SEAL Master Chief, Edward Byers, is from Grand Rapids and on 24 Sept 2020 had a road naming dedication in honor. State Route 65 was renamed to the "Master Chief Special Warfare Operator (SEAL) Edward C Byers Jr Medal of Honor Recipient Highway". The portion of the highway that was renamed runs from the State Route 65 and 64 split through the rest of Wood county to Henry county.

All content from Kiddle encyclopedia articles (including the article images and facts) can be freely used under Attribution-ShareAlike license, unless stated otherwise. Cite this article:
Grand Rapids, Ohio Facts for Kids. Kiddle Encyclopedia.