Woodville is a village in Sandusky County, Ohio, United States. The population was 2,135 at the 2010 census. The National Arbor Day Foundation has designated Woodville as a Tree City USA.

Woodville was laid out and platted in 1836. It was named for General Amos E. Wood.

Woodville was the midway point on the Western Reserve and Maumee Turnpike, which was also known as the "Old Mud Pike" because of the thick mud that often mired animals and vehicles alike. It was the first permanent route across the Black Swamp. The toll road connected Perrysburg with Lower Sandusky, which has since been renamed Fremont. 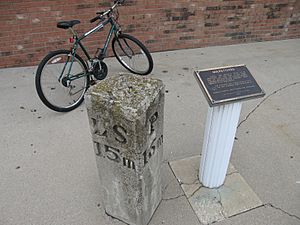 The 1842 milestone on the Western Reserve and Maumee Turnpike marks a point 16 miles from Perrysburg and 15 miles from Lower Sandusky (now Fremont).

A mile marker from the road remains at 100 East Main Street, in front of the village pharmacy. Several of the milestones are still in place along the 31 miles (50 km) stretch between present day Fremont and Perrysburg. The route is currently designated U.S. Route 20.

Woodville is also the point at which U.S. 20 crosses the Portage River. The former Pennsylvania Railroad also crossed the Portage River in Woodville. The line was at one time a main route from Toledo to Pittsburgh.

To the north of Woodville lies Woodville Road emanating from Toledo, passes through Genoa, ending in Elmore. It does not pass through Woodville.

A half mile upstream from the highway and the rail bridges lies Trailmarker Park. This is site of a shallow point in the river where Native Americans routinely crossed the Portage. A tree that was bent by Native Americans to mark the crossing point had a large limb that stretched over the west bank of the river, just south of the Cherry Street bridge. However, the limb was mistakenly removed by village workers in the 1990s.

According to the United States Census Bureau, the village has a total area of 1.33 square miles (3.44 km2), all land.

There were 850 households of which 33.5% had children under the age of 18 living with them, 55.9% were married couples living together, 8.8% had a female householder with no husband present, 3.6% had a male householder with no wife present, and 31.6% were non-families. 27.5% of all households were made up of individuals and 13.6% had someone living alone who was 65 years of age or older. The average household size was 2.51 and the average family size was 3.07.

There were 786 households out of which 37.0% had children under the age of 18 living with them, 59.8% were married couples living together, 8.3% had a female householder with no husband present, and 28.9% were non-families. 25.4% of all households were made up of individuals and 14.2% had someone living alone who was 65 years of age or older. The average household size was 2.52 and the average family size was 3.04.

There are three public parks in Woodville: Trailmarker Park is the largest. It is located along the west bank of the Portage River and is home to a public pool, several pieces of playground equipment and a boat ramp. Veterans Memorial Park is also referred to locally as Waterworks Park because of its proximity to the water treatment plant on North Perry Street. The park features a memorial to soldiers, complete with a decommissioned cannon and is located on First Street between Walnut and Perry Streets. Playground equipment is also in place at Veterans Memorial Park. Busdiecker Park was originally named Teardrop Park because of its shape. It is located at the intersection of Main Street (U. S. 20) and Findlay Road and is also bounded by the Portage River. Busdiecker Park features 13 flagpoles, one for each of the astronauts killed in the United States space program at the time of the park's renaming in the mid 1990s.

All content from Kiddle encyclopedia articles (including the article images and facts) can be freely used under Attribution-ShareAlike license, unless stated otherwise. Cite this article:
Woodville, Ohio Facts for Kids. Kiddle Encyclopedia.