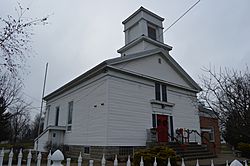 Fitchville is an unincorporated community in Fitchville Township, Huron County, Ohio, United States. It is part of the Norwalk Micropolitan Statistical Area. Fitchville is located at the intersection of U.S. Route 250, State Route 13, and State Route 162. The community has no post office of its own and is assigned the New London zip code of 44851.

Fitchville and Fitchville Township are named for former governor of the Connecticut Colony Thomas Fitch. The Fitch family once owned land in this area of the Firelands section of the historic Connecticut Western Reserve.

Early on November 23, 1963, a fire killed 63 people in the Golden Age Nursing Home, one mile north of Fitchville due to overloaded electrical wiring. National media attention was diverted from the incident by the assassination of President Kennedy, which had taken place 15 hours earlier. The tragedy led to improvements in fire safety building codes.

All content from Kiddle encyclopedia articles (including the article images and facts) can be freely used under Attribution-ShareAlike license, unless stated otherwise. Cite this article:
Fitchville, Ohio Facts for Kids. Kiddle Encyclopedia.