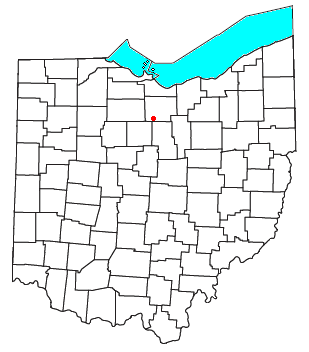 New Haven is a census-designated place in central New Haven Township, Huron County, Ohio, United States. Although it is unincorporated, it has a post office, with the ZIP code of 44850. It lies at the intersection of U.S. Route 224 with State Routes 61 and 598.

New Haven was lait out and platted in 1815. Like many other towns in the Firelands region of Ohio that was settled by former residents of New England who fled the region during the American Revolutionary War, New Haven is named for the Connecticut city of the same name.

New Haven is also one of the ending points for what has come to be known as the Old State Road or the Worthington-New Haven Road, an old route that connected this town and the Firelands area to Worthington and subsequently the capital city of Columbus. The Old State Road (not to be confused with current Huron County Road 52, also known as Old State Road), follows present day State Route 598 south to Galion.

All content from Kiddle encyclopedia articles (including the article images and facts) can be freely used under Attribution-ShareAlike license, unless stated otherwise. Cite this article:
New Haven, Huron County, Ohio Facts for Kids. Kiddle Encyclopedia.