Donald A. Glaser facts for kids 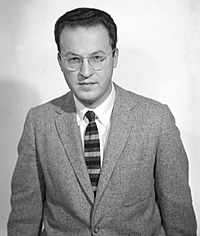 Donald Arthur Glaser (September 21, 1926 – February 28, 2013) was an American physicist and neurobiologist of Jewish descent. He won the 1960 Nobel Prize in Physics for his invention of the bubble chamber used in subatomic particle physics.

Glaser was born on September 21, 1926 in Cleveland, Ohio. He studied at Case Western University and at the California Institute of Technology. Glaser was married to Ruth Bonnie Thompson from 1960 until they divorced in c. 1970. Then he was married to Lynn Bercovitz from 1975 until his death in 2013. Glaser died on February 28, 2013 in his home in Berkeley, California from natural causes, aged 86.

All content from Kiddle encyclopedia articles (including the article images and facts) can be freely used under Attribution-ShareAlike license, unless stated otherwise. Cite this article:
Donald A. Glaser Facts for Kids. Kiddle Encyclopedia.