The village is often said to have had its beginnings as early as 1812, because land which was settled by pioneer Jacob Shupe, about a mile north of the original village site, was eventually (at a much later time) included into the Amherst city-limits. However, the actual original village-plat did not encompass Shupe's site (although Shupe's pioneering efforts within the township, which included constructing his own grist-mill and distillery, certainly added to the area's desirability for later pioneers to settle here). By the latter 1800's, Amherst acquired the title Sandstone Center of the World. Many early buildings are constructed of native sandstone, and the quarries were also an important source of grindstones. There were nine sandstone quarries in the area operating at the peak of production. Cleveland Quarries Company, established in 1868, no longer quarries in Amherst but is still actively quarrying Berea Sandstone.

Amherst is located in Hardiness Zone 6a/6b. A recent trend since the Hardiness rezoning is the discovery that certain tropical plants like the Needle Palm, Chinese Windmill Palm and Fiber Banana trees can grow in Amherst with some protection. 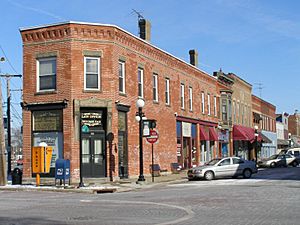 By far the most common mode of transportation to, from or within Amherst is by car. However the downtown area is walkable. State Route 2 runs west to east through the northern portion of Amherst providing access to downtown Cleveland (25 minutes), its suburbs and Sandusky, Ohio. There are two exit/entrance ramps in the city (Oak Point Road and State Route 58). The Ohio Turnpike also runs west to east along the City's southern border and there is one (exit/entrance) ramp just south of the city in Amherst Township at State Route 58. Parts of the city are also served by the Lorain County Transit system. Cleveland Hopkins (CLE) is the nearest International airport; it is located approximately 35 minutes east of the city.

Amherst is home to a Nordson factory that manufactures various products, as well as KTM-Sportmotorcycle America's Corporate office. In the city's scenic downtown section, Ben Franklin's dime store sells many types of fish and aquarium accessories, model cars, puzzles, and the like. Amherst is also home to Ziggy's, a bar and grill that President Obama visited in 2012.

Amherst has been growing steadily since the early 1980s. A recent housing boom has created demand for new retail areas in Amherst. Target has recently opened inside the city limits.

All content from Kiddle encyclopedia articles (including the article images and facts) can be freely used under Attribution-ShareAlike license, unless stated otherwise. Cite this article:
Amherst, Ohio Facts for Kids. Kiddle Encyclopedia.