Conneaut ( kon-EE-awt) is a city in Ashtabula County, Ohio, United States, along Lake Erie at the mouth of Conneaut Creek 66 miles (106 km) northeast of Cleveland. The population was 12,841 at the 2010 Census. Conneaut is located at the far northeastern corner of the state. 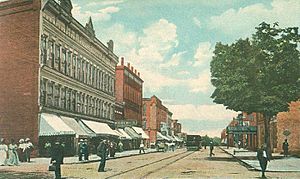 Conneaut is located on an old Native American trail, later used by early westbound pioneers. The word conneaut comes from the Seneca language, and has a disputed meaning. A Mississauga village was located at or near Conneaut, c. 1747. Conneaut was originally named Salem, and the parts surrounding it were named "Lakeville" from 1944–1964, though these were eventually combined into what is now known as "Conneaut". People still refer to parts of Conneaut as Lakeville or Amboy.

Conneaut was described in 1833 as having a printing office, one meeting house, two taverns, and several stores and shops.

On March 27, 1953 a three-train collision near Conneaut resulted in the deaths of 21 persons.

Conneaut is located in the northeastern-most corner of Ohio, bordering the state of Pennsylvania to the east and has 27 square miles (70 km2) within its corporate city limits.

Conneaut is a mixture of urban areas and rural farmland. The city has over seven miles (11 km) of shoreline along Lake Erie, with beaches, boating facilities and a healthy summer tourist trade.

There were 4,740 households, of which 29.2% had children under the age of 18 living with them, 44.2% were married couples living together, 14.2% had a female householder with no husband present, 5.7% had a male householder with no wife present, and 36.0% were non-families. 30.3% of all households were made up of individuals, and 14% had someone living alone who was 65 years of age or older. The average household size was 2.37 and the average family size was 2.90.

Transportation services Conneaut via Interstate 90, which bisects the city, along with an international shipping port and three railroads.

Major industries within the city include CSP of Ohio (formerly Venture Industries), General Aluminum (automotive parts), and CW Ohio (windows and pillars). The city's historic business district and its harbor business district are not as thriving as in the past. A few of the main businesses that anchor the downtown are Gerdes Pharmacy and Orlando Brothers grocery store. From 1944 until 2000, the Astatic Corporation was a major manufacturer of microphones. Astatic merged CAD (Conneaut Audio Devices) in 2000 which continues to produce microphones. Conneaut is also home to the Lake Erie Correctional Institution, which has a total staff of 295 employees as of February 2020. The port of Conneaut, Ohio is the loading point for train cars bearing iron ore for Pittsburgh area steel mills, including the Edgar Thomson Works.

All content from Kiddle encyclopedia articles (including the article images and facts) can be freely used under Attribution-ShareAlike license, unless stated otherwise. Cite this article:
Conneaut, Ohio Facts for Kids. Kiddle Encyclopedia.