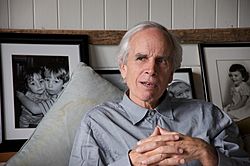 Douglas Rainsford "Doug" Tompkins (March 20, 1943 – December 8, 2015) was an American conservationist, outdoorsman, philanthropist, filmmaker, agriculturalist, and businessman. He was born in Conneaut, Ohio. He co-founded and ran two companies: the outdoor equipment and clothing company The North Face and the Esprit clothing company.

On December 8, 2015, Tompkins was kayaking with five others on General Carrera Lake in southern Chile when strong waves caused their kayaks to capsize. Tompkins spent a "considerable amount of time" in waters under 40 °F (4 °C). He was flown via helicopter to a hospital in nearby Coyhaique, where he died from severe hypothermia. He was 72 years old and was survived by his wife, two daughters, mother and brother.

All content from Kiddle encyclopedia articles (including the article images and facts) can be freely used under Attribution-ShareAlike license, unless stated otherwise. Cite this article:
Douglas Tompkins Facts for Kids. Kiddle Encyclopedia.