Lorain is a city in Lorain County, Ohio, United States. The municipality is located in northeastern Ohio on Lake Erie, at the mouth of the Black River, about 30 miles west of Cleveland. As of the 2020 census, the city had a population of 65,211, making it Ohio's tenth-largest city, the third-largest in Greater Cleveland, and the largest in Lorain County by population.

Lorain is located in the former Western Reserve and was occupied by Native Americans until the consummation of the Treaty of Fort Industry in 1805. The treaty, between the U.S. government and the Wyandot, Ottawa, Chippewa, Munsee, Delaware, Shawnee, and, Pottawattamie, seceded the land west of the Cuyahoga River to the Connecticut Western Reserve. In notes from surveyor Abraham Tappan, land west of the Cuyahoga River was entirely void of permanent settlement from any people, meaning that all aboriginal people evacuated all 3,336,000 acres of land by the time Tappan arrived near the Black River in 1807. The first permanent settlement in present-day Lorain was founded in 1807 by Azariah Beebe and established as a trading post for trading goods with Native Americans. James Reid, one of the original settlers of Black River township, built a large house near the bluffs overlooking the Black River in 1812 to be used as a dwelling and tavern. In the following years, a post office for "Mouth of Black River," which also held the office for the Justice of the Peace.

The Black River provided several advantages for the early settlement and allowed for it to be a more desirable location to build. The Black had the first navigable waters west of the Cuyahoga River and offered a slight embayment along the cliffed shoreline that provide safety for the small sailing craft of the time. It was said that the Black River harbor was the best natural harbors among the Great Lakes. In addition to providing an area for immigrants to stop while on their way to the Firelands, the harbor provided space for ship building, with the first ship, General Huntington, being built in 1819. 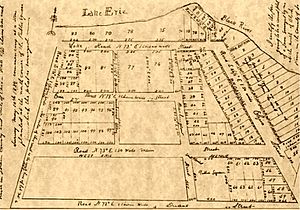 1834 Plat Map for the village of "Mouth of Black River", from Durand survey. (click for more info).

The people of what would one day become Lorain incorporated the village of Charleston in 1834 and a town site was surveyed by Edward Durand containing 7 city blocks. The original plat for the village included a public square, now named Veterans Memorial Park, and an early street grid, which was the area of town bound by First Street to the north, Broadway Avenue to the east, Fourth Street to the south, and Oberlin Avenue to the west. Lots were sold in the town and in 1836 the village of Charleston was granted a charter by the Ohio Legislature.

The Charles Berry Bridge is located in Lorain, and is the second-largest bascule bridge in the world.

There are 51 parks managed by the city parks and recreation department.

Lakeview Park is bisected by West Erie Avenue (U.S. Route 6), with the northern section being managed by the Lorain County Metro Parks and the southern by the city. The park was established circa 1917 under Mayor Leonard M. Moore as a way of providing more publicly accessible space on the lakefront. There were 8 casualties as a result of the tornado in 1924, which also destroyed all of the original bathhouse except for the concrete arches, which provide the support as the base for the current bathhouse. The bathhouse was rebuilt after the tornado and replaced once more in 2007, following the takeover of the park in 2006 by the Lorain County Metro Parks.

The Lorain County Metro Parks section of Lakeview Park features a playground on the beach, volleyball courts, a bathhouse with eight family changing rooms, five showers, and a concession stand, several gazebos and picnic shelters, lawn bowling, a color-changing fountain, an Easter egg basket, and a historical rose garden. The Lakeview Fountain was built in 1935 with local Amherst sandstone and has a multi-color display at night, with the spray of the fountain reaching 30 to 50 feet in height. The Easter basket was dedicated on April 3, 1941 as the "floral basket," featuring the design patented by Lorain Parks Department employee David Shukait; traditionally, families in Lorain, in celebration of Easter, take an annual photo at the basket. The rose garden was originally dedicated on May 30, 1932 and has 2,500 roses in 48 beds. The shape of the garden, a wheel with eight spokes, is the Rotary International emblem in honor of the 17 community organizations that funded the garden initially, including the Lorain Rotary. The garden was restored in 2005 and roses are planted to honor and commemorate those that had ties to the community or garden itself in city history.

Over 70 different nationalities live in the Lorain area, hence the nickname "The International City." One of the highlights of the summer season is the Lorain International Festival. Many were originally attracted by work in the steel mills and ship yards. Lorain is sometimes referred to as Steel City because of its well-known steel mill. Downtown Lorain was devastated by a tornado in 1924 and as part of an initiative to rebuild the downtown several historic buildings were constructed, including the Lorain Palace Theatre which opened in 1928 and continues to operate today.

Lorain is notable for its deindustrialized economy, formerly being home to the American Ship Building Company Lorain Yard, Ford Motor Company Lorain Assembly Plant, and United States Steel Corporation's steel mill on the City's south side. The city faces many similar issues to other Rust Belt cities, including population decline and urban decay. Poverty in the city is above the national average at 26.2%, lower than Cleveland's 36%. but higher than neighboring Elyria's 22.2%

CenturyTel of Ohio is based in Lorain.

Lorain has a public library, a branch of the Lorain Public Library.

Lorain primarily has a local street network with four state highways maintained by the Ohio Department of Transportation and one U.S. route. There are no interstate highways that pass through the city limits. Public transit is provided by Lorain County Transit, which operates two fixed-route bus lines. Norfolk Southern Railway operates a freight railroad running parallel to the Lake Erie shoreline.

There are three bridges that cross the Black River in the Lorain Harbor; two of these bridges are for motor vehicles and pedestrians and one is for rail transport only. The two motor vehicle/pedestrian bridges are the Charles Berry Bridge and the Lofton Henderson Memorial Bridge.These two bridges, formerly known as the Erie Avenue Bridge and 21st Street Bridge, respectively, opened on October 12, 1940. At the time of opening, they were coined the "Twin Bridges."

The rail bridge, historically known as the 11th Street Bridge, is a single-track vertical-lift truss bridge operated by the Norfolk-Southern Railway and constructed in 1974.

All content from Kiddle encyclopedia articles (including the article images and facts) can be freely used under Attribution-ShareAlike license, unless stated otherwise. Cite this article:
Lorain, Ohio Facts for Kids. Kiddle Encyclopedia.