Brecksville is a city in Cuyahoga County, Ohio, United States, and a suburb in the Greater Cleveland area. The city's population was 13,656 at the 2010 census.

Brecksville was founded in 1811, four years after several men — including Colonel John Breck — purchased the surrounding area. After the land was surveyed, Seth Payne, one of the surveyors, brought his family and settled in the area in June 1811, and he was soon followed by many other families. Although Colonel Breck never lived in Brecksville, his three sons did, and members of his family continued to live in Brecksville until 1934, when his great-grandson Dr. Theodore Breck died. A comprehensive early historical account of Brecksville was written by William R. Coates and published by The American Historical Society in 1924.

Brecksville was incorporated as a village in 1921, and it gained the status of city in 1960.

According to the United States Census Bureau, the city has a total area of 19.68 square miles (50.97 km2), of which 19.57 square miles (50.69 km2) is land and 0.11 square miles (0.28 km2) is water. Brecksville's eastern border is traversed by the Cuyahoga River and borders Sagamore Hills Township and Boston Township, southern border Richfield Township (all three townships in Summit County), western border Broadview Heights and northern border Independence.

Along with the Cleveland Metroparks and Cuyahoga Valley National Park, Brecksville has a Human Resources and Community Center.

There were 5,349 households of which 30.9% had children under the age of 18 living with them, 62.9% were married couples living together, 6.9% had a female householder with no husband present, 2.8% had a male householder with no wife present, and 27.4% were non-families. 24.7% of all households were made up of individuals and 11.2% had someone living alone who was 65 years of age or older. The average household size was 2.50 and the average family size was 3.00. 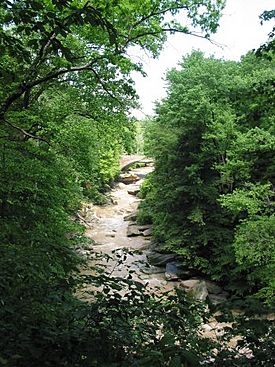 Chippewa Creek in Brecksville Reservation, the largest park by in the Cleveland Metroparks system.

Brecksville is located near or on a number of highways that provide access to neighboring communities. Its major thoroughfares are State Route 21 (Brecksville Road) north and south, and State Route 82 (Royalton Road west of SR 21, Chippewa Road east of SR 21). I-77 provides Brecksville with direct access to Cleveland and Akron and as far south as Columbia, South Carolina. Brecksville accesses I-80 (the Ohio Turnpike) at the Richfield I-77 Interchange thereby connecting Greater Cleveland to New York City and San Francisco, California.

The Greater Cleveland Regional Transit Authority and Akron Metro RTA buslines converge in Brecksville at the decommissioned VA Medical Center off Brecksville Road, and provide access to Cleveland and Akron.

In 2015, Brecksville was named Ohio's third safest city in its population size category. The study focused on recent FBI statistics.

In 2014, Brecksville was named by Family Circle magazine as one of the top ten U.S. towns to raise families. The magazine stated that Brecksville has top-rated schools and plenty of green space, including Cuyahoga Valley National Park.

Brecksville's Chippewa Garden Club was formed in 1949. The club is a perennial award winner from the Garden Clubs of Ohio. Awards include:

Brecksville won the 2003 “America in Bloom” award and was the 2003 national winner of the “Proven Winners Landscaped Areas Award.” Brecksville has won 21 Tree City Year Awards.

Local theater and the arts

Brecksville Little Theatre was started in 1941 and incorporated as a non-profit community organization in 1949 under charter by the State of Ohio. Performances have been continually held in the Old Town Hall, a registered historic landmark. In 1951, the comedy “Here Today” was directed by nearby Shaker Heights native Paul Newman. The theatre provides two scholarship awards, The Jack Hruby Humanities Award and the Schoenfelt Dramatics Award, to deserving high school seniors in the arts and humanities.

Brecksville Theater on the Square, founded in 1975, has developed into a well established theater of the performing arts, providing the community with family theater, and a wide variety of drama classes and programs offered to students, pre-school through adults.

The Brecksville Center for the Arts is a non-profit, multidisciplinary art center.

Brecksville agreed to a Civil Defense Siren system with other cities in Cuyahoga County. The city has 4 sirens from American Signal Corporation and Whelen Engineering Company.

Jerry N. Hruby was elected to his eighth term as mayor of Brecksville which began on January 2, 2016. Mayor Hruby also serves as the city's Safety Director. In 2011 the Governor of Ohio appointed Hruby to the Ohio Turnpike Commission. He currently is serving as chairman of the commission.

All content from Kiddle encyclopedia articles (including the article images and facts) can be freely used under Attribution-ShareAlike license, unless stated otherwise. Cite this article:
Brecksville, Ohio Facts for Kids. Kiddle Encyclopedia.