In 1806, the area that was to become Parma and Parma Heights was originally surveyed by Abraham Tappan, a surveyor for the Connecticut Land Company, and was known as Township 6 - Range 13. This designation gave the town its first identity in the Western Reserve. Soon after, Township 6 - Range 13 was commonly referred to as "Greenbriar," supposedly for the rambling bush that grew there. Benajah Fay, his wife Ruth Wilcox Fay, and their ten children, arrivals from Lewis County, New York, were the first settlers in 1816. It was then that Greenbriar, under a newly organized government seat under Brooklyn Township, began attending to its own governmental needs.

Self-government started to gain in popularity by the time the new Greenbriar settlement contained twenty householders. However, prior to the establishment of the new township, the name Greenbriar was replaced by the name Parma. This was largely due to Dr. David Long who had recently returned from Italy and "impressed with the grandeur and beauty...was reminded of Parma, Italy and...persuaded the early townspeople that the territory deserved a better name than Greenbriar."

Thus, on March 7, 1826, a resolution was passed ordering the construction of the new township. It stated, 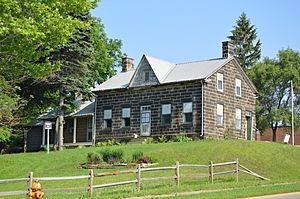 Phillip Henninger House. Built in 1842, it is listed on the National Register of Historic Places.

On the same day, a public notice was issued to qualified electors by the County Commissioners. They met at the house of Samuel Freeman on April 3, 1826 to elect township officers according to the law. It was then that the first eleven officers were elected to lead the new government.

During this time, Parma Township remained largely agricultural. The first schoolhouse was a log structure built on the hill at the northern corner of what is now Parma Heights Cemetery. A memorial plate on a stone marks the spot. In 1827, the township was divided into road districts. The Broadview Road of today was then known as Town Line Road as well as Independence Road. Ridge Road was known then as Center Road as it cut through the center of town. York Road was then known as York Street as arrivals from the state of New York settled there. Pearl Road then had many names which included Medina Wooster Pike, Wooster Pike, the Cleveland Columbus Road, and the Brighton and Parma Plank Road. 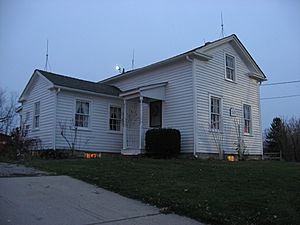 A stone house, built in 1849 and known as the Henninger House, was occupied by several generations of Henningers and is still standing today. The house rests on one of the higher points in Cuyahoga County, which provided visibility for the entire northeastern part of Parma Township. This was also the same site where the Erie Indians, centuries before, stood to read and send fire signals as well as pray to their spirits.

In 1911, Parma Heights, due to the temperance mood of the day, separated itself from the Parma Township after by a vote of 42 to 32 and was incorporated as a village comprising 4.13 square miles.

"A main reason for establishing the village of Parma Heights was to get a town marshal...There is one saloon in the territory...some pretty rough crowds Sundays have disturbed the quiet of the neighborhood...wanted it closed on Sundays. To do this they wished a town marshal. They couldn't have a town marshal without becoming a village, so they became one."

By 1920, the US census showed Parma Township had a population of just 2,345, but the following decade proved to be a time of significant growth and development for Parma. It was in the 1920s that Parma Township transformed from a farming community into a village. On December 15, 1924, Parma was incorporated as a village.

The largest and fastest growing development of that time was H. A. Stahl's Ridgewood Gardens development, which started in 1919, continued through the 1920s, and into the 1930s. A resident of Shaker Heights, Ohio's first Garden City, H. A. Stahl developed Ridgewood as an ambitious "model village" project patterned along the lines of and rivaling the earlier Shaker Heights project with "churches, schools, motion picture theater, community house, and other features forming a part of all well-developed residence communities.". Ridgewood was designed and marketed as a Garden City on 1,000 acres of land to accommodate about 40,000 residents "325 feet above Lake Erie, in the healthiest section of the South Side, free from the smoke of industries, or the congestion and noises of sections nearer the Public Square."

On January 1, 1931, Parma became a city with a population of 13,899. Whereas the incorporation of the village of Parma was met with much optimism, the newly established city of Parma faced the uncertainty of the Great Depression which had almost entirely stopped its growth. Money was scarce, tax income was limited, and some began to talk of annexation of both the city and school district to Cleveland. Both annexation issues, however, were soundly defeated as Parma voters overwhelmingly voted against them and silenced proponents of annexation. Not long after this, Parma was once again solvent due in large part to the newly created Gallagher Act and the determination of Parma's Auditor, Sam Nowlin. By 1941, a building boom appeared to be underway in Parma just as the United States was about to enter World War II.

After World War II, Parma once again began to experience tremendous growth as young families began moving from Cleveland into the suburbs. Between 1950 and 1960, Parma's population soared from 28,897 to 82,845. By 1956, Parma was unchallenged as the fastest growing city in the United States. The population peaked in 1970 at 100,216.

Today, Parma's population has reached 81,601, though it remains one of the Cleveland area's top three destinations young adults (aged 22 to 34) are increasingly choosing as a place to live, along with Lakewood and downtown Cleveland and was recently recognized by Businessweek as one of the best places to raise kids in Ohio.

Two major changes and developments have recently occurred regarding two principal sites within the city:

Parma's major north-south roads, in order from west to east, are:

Its major east-west roads, in order from north to south, are:

The Drew Carey Show's opening credits of its first season consisted of a caricature of Drew Carey — consisting of his face and a yellow tie — singing the Robert McGuire-penned "Moon Over Parma". The song was trimmed for the opening sequence, and the reference to Eastlake in the line "Guide her to Eastlake underneath your silvery light" was changed to a reference to Cleveland to stay in theme with the show.

Moon over Parma bring my love to me tonight.
Guide her to Eastlake, underneath your silvery light.
We met in Ashtabula, she was doing the hula.
I handed her my radishes and pledged my love that night.

Moon over Parma, won't you bring my love to me?
Shine on the freeway and guide her AMC.
Get her past those radar Mounties, bring her to Lake County, Moon over Parma, tonight.

Moon over Parma shine on I-271.
We can't get together in the warm light of the sun.
I'm askin' you don't fail. Get her safely through Linndale,
I can't go to Parma cause my Edsel will not run.

Moon over Parma, where those pink flamingos stand.
I need her kisses and the soft touch of her hand.
We're goin bowlin, so don't lose her in Solon.
Moon over Parma, tonight. I said tonight.

Occasionally, during the 1960s and 1970s, Parma was the target of light-hearted jabs by local movie show hosts Ghoulardi, Big Chuck & Little John, and The Ghoul, due to its central European and, most specifically, Polish, make-up. Ghoulardi, the horror host of late night Shock Theater at WJW-TV, Channel 8, in Cleveland, Ohio from January 13, 1963 through December 16, 1966, made a series of shorts called "Parma Place" and focused on an alleged love of white socks, pink flamingos, chrome balls, kielbasa, pierogi and the polka.

During the population boom between 1950 and 1980, Parma's commercial sector grew to match its residential sector. Since the 1950s, Parma has fostered the growth of many small businesses and been an operating hub for such well-known companies as General Motors, the Union Carbide Research Center (now GrafTech International-CLOSED as of 2017) and Cox Cable Television.

The Shoppes at Parma

The Shoppes at Parma, formerly Parmatown Mall, is a commercial shopping district that totals approximately 800,000 square feet. It is located approximately 3 miles south of Cleveland's southern border at the southwest corner of Ridge Road and West Ridgewood Drive in central Cuyahoga County. It is anchored by J.C. Penney, Dick's Sporting Goods, Marc's and Walmart. The mall opened as a shopping plaza in 1956 and was enclosed in the mid-1960s.

Currently, it is owned and managed by Phillip's Edison & Co. and is undergoing extensive redevelopment at an expected cost of more than $70 million.

Redevelopment will transform the commercial center into a pedestrian-friendly community-oriented mall and will include attractive landscaping, new lighting, creation of two tree-lined boulevards, repaving of the parking lots, changing the entire facade of the outdoor shopping strip and medical offices, demolition of the current Macy's and Dick's Sporting Goods buildings, creating a new point of entry to J.C. Penney from West Ridgewood Drive, the construction of six new outbuildings, and the separation of Walmart from the rest of the mall.

Recently, it was announced that a 15-member "Parma Mayor's Town Center Task Force" will be formed to develop a plan for a town center based around the Ridge Road-West Ridgewood Drive intersection that features the Shoppes at Parma, Parma Branch library, University Hospitals Parma Medical Center and City Hall. It will be made up of representatives from various organizations including the Cuyahoga County Public Library, Parma Area Chamber of Commerce, Parma schools and the Cleveland Metroparks' West Creek Reservation.

This commercial district features a large number of small, family-owned businesses and medical offices, features one of the most "walkable" neighborhoods in Parma, and boasts a traffic count of more than 40,000 vehicles each day at the intersection of State and Snow Roads. This area also hosts the Ukrainian Independence Day parade (August).

In 2013, Parma formed a sister-city relationship with Lviv, Ukraine and is home to Ohio's largest Ukrainian community, the majority of whom are foreign born, with more than twice the number of any other city.

Parma is the seat of the Ukrainian Catholic Eparchy of Saint Josaphat, which was established by Pope John Paul II in 1983.

This commercial district features a large number of small, family-owned businesses and medical offices, features one of the most walkable neighborhoods in Parma, and boasts a traffic count of more than 40,000 vehicles each day at the intersection of Ridge and Snow Roads. This area also hosts the Polish Constitution Day parade (May), St. Charles Carnival parade (July), Independence Day parade (July), and Christmas parade (December).

The District's sports stadium is Byers Field. All three high schools play golf at Ridgewood for their home course. The rivalry that exists between these schools is well documented.

Parma's major north-south roads, in order from west to east, are:

Its major east-west roads, in order from north to south, are:

All content from Kiddle encyclopedia articles (including the article images and facts) can be freely used under Attribution-ShareAlike license, unless stated otherwise. Cite this article:
Parma, Ohio Facts for Kids. Kiddle Encyclopedia.