Berea ( bə-REE-ə) is a city in Cuyahoga County in the U.S. state of Ohio and is a western suburb of Cleveland. The population was 19,093 at the 2010 census. Berea is home to Baldwin Wallace University, as well as the training facility for the Cleveland Browns and the Cuyahoga County Fairgrounds. 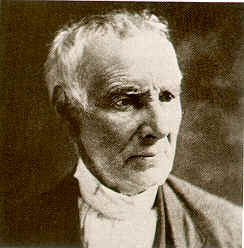 John Baldwin named Berea and produced the grindstones that made the town famous.

Berea, Ohio, was established in 1836. Henry O. Sheldon, a circuit rider, selected Berea and Tabor as possible names for the community. The townspeople decided to simply flip a coin, and Berea won, thus becoming the town's name.

The first European settlers were originally from Connecticut. Berea fell within Connecticut's Western Reserve and was surveyed and divided into townships and ranges by one Gideon Granger, a gentleman who served as Postmaster General under President Thomas Jefferson. Abram Hickox, a Revolutionary War veteran, bought the first plot in what is today Middleburg Heights and in 1808 traveled west from Connecticut to his new purchase. Dissuaded by the swampy and heavily forested land he decided to settle in Cleveland. He became successful as Cleveland's first full-time blacksmith. His plot of land was sold to his nephew, Jared Hickox, who came to the area with his wife Sarah and family in 1809. They followed an ancient Indian highway down through the forest from Cleveland and then, at what is now the corner of Bagley and Pearl roads, began to hack their way directly west. About two miles in they found Granger's plot markers and set up their homestead. Today this area is a strip mall on Bagley Road, just down the road from Berea. At the time Hickox discovered Granger's plot markers, the area was a swampy lowland and, as fate would have it, the Hickox's two grown up sons died from typhoid fever shortly after the family's arrival. The family farm was in dire straits, having been so severely depleted of male laborers. Love came to the rescue, however; and the area's spirits were lifted by its first marriage, that of Jared's daughter Amy Hickox to a recent arrival, Abijah Bagley. Bagley ended up taking over the farm and managing it into a successful concern. Today, Berea's largest street bears his name.

In 1828, educator John Baldwin moved to Middeburg Township where he joined forces with James Gilbrith, a disciple of Josiah Holbrook who wanted to found a lyceum village. This village was founded in 1837. Baldwin ran the Lyceum Village School for five years until June 1842, when it went bankrupt. However, one day while walking home, he had an impulse to take a new route across the river on his farm. He noticed a grouping of exposed rocks which he judged would make superior grindstones. This was the beginning of the Berea quarrying industry. After the Big Four Railroad was built from Cleveland to Cincinnati, Baldwin built a railroad to connect his quarries to the Big Four Depot. It was then that Baldwin and the others of the Lyceum Village tried to think of a name for their new town. After Gilbrith proposed Tabor (perhaps from the biblical Mount Tabor), John Baldwin suggested Berea, citing the biblical Berea in the Acts 17:10-11. After a coin flip, Berea was chosen.

In 1842, the Baldwin Institute opened on the south side of town. The school was open to all, regardless of sex, race or religious creed. In 1852, it was renamed Baldwin University. By the 1880s, the quarries had begun to intrude on the site of the university. In 1891, the school broke ground for a new campus at Front Street and Bagley Road. New buildings were constructed and old buildings were moved. In 1866, James Wallace purchased the site of the Lyceum Village from the German Children's Home to become the German Wallace College Campus. In 1913, Baldwin University and German-Wallace College merged to become Baldwin–Wallace College. Berea High School was the town's first high school, founded in 1882. 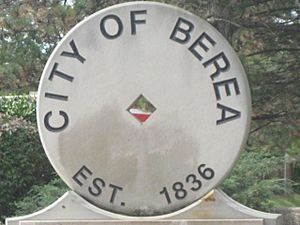 The geological stratum on which the city rests is the sedimentary formation "Berea sandstone", a geological formation named after the city which extends across Ohio, eastern Pennsylvania, and northern Kentucky. This comprises a sandstone laid down during the early Mississippian. In the 19th and early 20th century, this formation was extensively quarried, with the quarries eventually displacing the original main street of the town, as well as the original location of Baldwin University, which sold its five-acre campus to the quarries for $100,000 in 1888, moving to a new location to the north.

After beginning of quarrying of the Berea sandstone in the 1830s, Baldwin initially shipped grindstones to Cleveland by ox carts, and later the quarries were connected to the railroad by a spur line. Berea proclaims itself "The Grindstone Capital of the World". The town's symbol is a grindstone, a tribute to the many grindstones that came out of its quarries.

The quarries also provided sandstone that was extensively used as a construction material, in the form of Berea dimension stone. Huge amounts of it came from Berea, and were used architecturally in many important buildings. The quarries closed in the late 1930s, when concrete came into wide use for construction. Several lakes in the area are former quarry pits that have been allowed to fill with water, including Baldwin Lake, Wallace Lake and Coe Lake.

The east branch of the Rocky River runs through Berea, providing its water supply for most of the year. The Cleveland Metroparks Rocky River Reservation and Mill Stream Run Reservation run through the city.

There were 7,471 households of which 25.6% had children under the age of 18 living with them, 43.7% were married couples living together, 11.4% had a female householder with no husband present, 3.7% had a male householder with no wife present, and 41.2% were non-families. 33.9% of all households were made up of individuals and 11.5% had someone living alone who was 65 years of age or older. The average household size was 2.26 and the average family size was 2.90.

There were 7,173 households out of which 34.9% had children under the age of 65 living with them, 48.1% were married couples living together, 10.6% had a female householder with no husband present, and 37.7% were non-families. 32.3% of all households were made up of individuals and 12.1% had someone living alone who was 65 years of age or older. The average household size was 2.35 and the average family size was 3.00.

Baldwin-Wallace is the home of the Riemenschneider Bach Institute, a research institute devoted to J. S Bach.

The first collegiate Bach festival in America was founded in 1932 by music educator Albert Riemenschneider and his wife Selma. The couple had a noble mission: to enrich the lives of Northeast Ohio residents by bringing the world's greatest Bach soloists to the stage of Baldwin Wallace University, while offering the school's Conservatory students an unparalleled opportunity to experience the highest performance standards of their day.

As Riemenschneider conceived it, the festival would rotate Bach's four major works ~ the B-Minor Mass, the St. John Passion, the St. Matthew Passion and the Christmas Oratorio ~ every four years in sequence. Since the inception of the Festival, Baldwin Wallace students perform the major choral and orchestral works with a cast of internationally renowned vocal soloists, faculty and local professionals.

All content from Kiddle encyclopedia articles (including the article images and facts) can be freely used under Attribution-ShareAlike license, unless stated otherwise. Cite this article:
Berea, Ohio Facts for Kids. Kiddle Encyclopedia.