Some say the village was named after William Welling, a local resident, while others believe the name is derived from the title of the Duke of Wellington.

Wellington was incorporated as a village in 1855.

In 1858, the former American House Hotel (later torn down and replaced by Herrick Memorial Library) was the site of the Oberlin-Wellington Rescue. A group of men, both white and black and many from Oberlin, swarmed the hotel to rescue runaway slave John Price. He was being held by a US Marshal and his men, who intended to return him to his master in Kentucky.

The abolitionists transported Price out of town en route to the Underground Railroad and helped convey him to Canada. Thirty-seven men were indicted, but only two, Simeon M. Bushnell and Charles Henry Langston, were tried in federal court for interfering with the marshal in carrying out the Fugitive Slave Law. After Langston's eloquent speech about slavery and discrimination, the judge gave them light sentences. The events and trial received national attention, and kept the issue of slavery at the forefront of debate.

Archibald M. Willard, painter of the patriotic Spirit of '76 painting, lived in Wellington during the 19th century. He is buried in Greenwood Cemetery on the outskirts of the village. The Spirit of '76 Museum, also located in Wellington, is dedicated to Willard and the history of Wellington. The original drum and fife used as models in the painting are also on display.

In 2010, Wellington was named the "Best Old House Neighborhood" for the state of Ohio by This Old House Magazine in their annual feature article.

Wellington is located at the intersection of State Routes 18 and 58.

Every June the Ohio Scottish Games come to the Lorain County Fair Grounds to celebrate Scotland's rich history and culture.

In the late 19th century, Wellington was known as the "Cheese Capital of the World". The Wellington Cheese Festival is celebrated on the third weekend of every July. The festival has live music, food, children's rides and games, crafts and car shows.

Two weeks before Labor Day, in late August, the Lorain County Fair, one of the biggest county fairs in the state of Ohio, takes place west of town on State Route 18 at the fairgrounds.

Each September since 1983, the Friends of the Herrick Memorial Library have sponsored the Harvest of the Arts, a large juried arts festival held on the town square. The event attracts more than 100 artisans and craftspeople and includes live musical performances, children's activities, and the raffle of a handmade quilt. All proceeds from the event support public programming at the library.

Wellington has one sister city, as designated by the Sister Cities International: 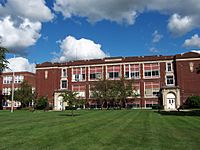 Wellington is served by the Wellington Exempted Village School District (WEVSD), including the McCormick Middle School and Wellington High School.

All content from Kiddle encyclopedia articles (including the article images and facts) can be freely used under Attribution-ShareAlike license, unless stated otherwise. Cite this article:
Wellington, Ohio Facts for Kids. Kiddle Encyclopedia.