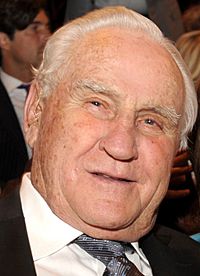 Donald Francis Shula (January 4, 1930 – May 4, 2020) was an American professional football coach and player. He had the most wins for a coach in National Football League (NFL) history.

In 1997, he was added to the Pro Football Hall of Fame. In retirement, he owned many steak restaurants and a line of condiments.

Shula was born in Grand River, Ohio. He studied at John Carroll University. Shula died on May 4, 2020 in Indian Creek, Florida at the age of 90.

All content from Kiddle encyclopedia articles (including the article images and facts) can be freely used under Attribution-ShareAlike license, unless stated otherwise. Cite this article:
Don Shula Facts for Kids. Kiddle Encyclopedia.