Garfield Heights is a city in Cuyahoga County, Ohio, United States. It is a suburb of Cleveland. The population was 28,849 at the time of the 2010 census.

The ethnic groups of Garfield Heights include Poles, Slovenes, Italians, Irish, and African-Americans. 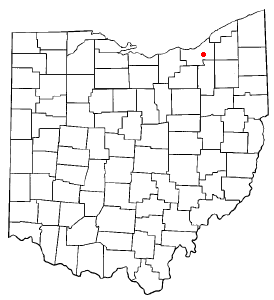 Location of Garfield Heights in Ohio

on the northwest corner of Plymouth and Turney roads. Nutt will remain in business here until his retirement in 1979.

On October, 14, the State of Ohio auditor's office declares the city to be in fiscal emergency. This is only the third city in Cuyahoga County to ever have this designation since Ohio adopted fiscal rankings in 1979. Cleveland and East Cleveland have been the only other cities in the county under fiscal emergency, but both have since returned to solvency.

City View goes into receivership with new owners, as the Klein Interest of Monsey, New York default on their loan.
On October 22, the Ohio EPA arees that a methane gas mitigation system is needed. All new construction at CityView will be required to have mitigation systems.
On November 3, Garfield Heights elects its first new mayor in 26 years. The winner is Vic Collova who previously served as council president.
July 1: The maternity ward at Marymount Hospital closes.
July 15: Mayor Vic Collova announces that Transportation Blvd will be expanded after years of meeting EPA rules of adding methane gas control and monitoring systems. Construction is underway.
2011 the Cuyahoga County Public Library announced that Garfield Heights will be having a new 30,000 sqft2 branch library which will be built on the site of current 1965 library. Garfield Hts has one of smallest branches at 12,500 sqft2. The new Garfield Library will be completed in 2013. Robert Sackett is promoted to Police Chief, he is the city's fifth Chief.

March 2012: Marymount Hospital and the Cleveland Clinic open Marymount's new surgical center and lobby. It is a glass enclosed structure.
June 2012: St. Monica Catholic Elementary School graduates its last class, and for the 2012-13 school year becomes Saint Benedict Catholic Elementary School, a joint venture between Saint Monica Church and Saint Martin of Tours Church, which closed its school in neighboring Maple Heights.
July 2012: Terrance Olszewski became the new Superintendent of Schools of Garfield Heights. He was the principal of Garfield Heights High School.
August 2012: Saint Monica Church will celebrate 60 years with a mass by Bishop Richard Lennon. Overdrive, Inc., a leading full-service digital distributor of eBooks, audiobooks, and other digital content, announces that they will move from Valley View to their new "Blue Sky" campus in October 2012.

Garfield Heights has a restrictive height of 90 feet (27 m) for most of its buildings. This height restriction was made into law on 25 March 1962. Cellular or wireless towers are the exceptions.

Garfield Heights is home to Marymount Hospital, which was established by the Sisters of St. Joseph of the Third Order of St. Francis in 1949. The hospital was built at a cost of $2.1 million between 1946-49. It was dedicated in October 1949. In the 1950s with Garfield Heights and its neighbors expanding, Marymount expanded too. In 1966 Marymount grew by adding the first ambulance to the base radio system and using a MRI system.

In the 1970s, Marymount added mental health services and renovated the hospital tower. This renovation took from 1972 to 1979 and cost of $30 million. In the 1990s, Marymount again grew by adding a new medical office tower and new services.

In the 2000s, Marymount grew due to the closing of St. Alexis/St. Michael's. The hospital has added more intensive-care unit beds and more emergency room capacity in a new state-of-the-art tower which opened in 2007. In 2003, Marymount joined the world-renowned Cleveland Clinic as part of its system. JCAHO, the Joint Commission of American Healthcare Organizations, certified Marymount as a primary stroke center. Marymount is the largest employers in Garfield Heights with 1,200 workers. Marymount has 310 beds and 200 doctors.

In 2010, Marymount expanded the main hospital campus with a future cardiovascular surgery center so open heart surgery can be performed. Formerly, Marymount patients went to Hillcrest Hospital or the main Cleveland Clinic for these procedures. In 2011, Marymount closed its maternity ward due to its own declining birthrates and the increasing birthrates at Fairview and Hillcrest hospitals. In March 2012, Marymount opened a $45,000,000 surgical center and entrance lobby. It is a glass-enclosed atrium and has a staircase.

Marymount Hospital, part of the Cleveland Clinic system, is the city's largest employer.

The Ohio Department of Transportation has its District 12 headquarters in the city.

In 2007, Garfield Heights and its neighbor Maple Heights were mentioned by CNN/Money as two of America's most affordable communities.

The Garfield Heights Chamber of Commerce was established in the 1960s and includes over 250 business members from the area.

The Ohio Catholic Federal Credit Union, one of the largest credit unions in Ohio, is based in Garfield Heights. As of 2011, it had 17,456 members and $155 million in assets. 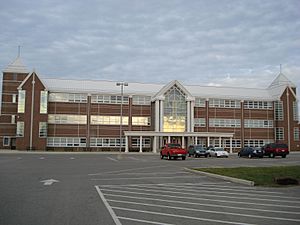 Garfield Heights has its own public school system comprising three elementary schools, one middle school, and one high school. It is governed by a five-member elected board. There are two Catholic schools in the city; St. Benedict and Trinity High School.

All content from Kiddle encyclopedia articles (including the article images and facts) can be freely used under Attribution-ShareAlike license, unless stated otherwise. Cite this article:
Garfield Heights, Ohio Facts for Kids. Kiddle Encyclopedia.