Ashland is a city in and the county seat of Ashland County, Ohio, United States, 66 miles southwest of Cleveland and 82 miles northeast of Columbus. The population was 20,362 at the 2010 census. It is the center of the Ashland Micropolitan Statistical Area (as defined by the United States Census Bureau in 2003).

Ashland was designated a Tree City USA by the National Arbor Day Foundation in 1984.

Ashland was laid out by Daniel Carter in 1815. Ashland was originally called Uniontown, but in 1822 the city was compelled to adopt a new name because another city in Ohio was already named Uniontown. The new name of Ashland was selected by supporters of the Kentucky congressman Henry Clay, from Ashland, his estate near Lexington.

Later, "Henry Clay High School" was considered as a name for what is now known as Ashland High School.

In the mid-1800s, Ashland pioneers traveled to Oregon, naming a settlement after the town.

The city contains 85.6 miles (137.8 km) of streets, one hospital, one fire station, one police station, and five parks. 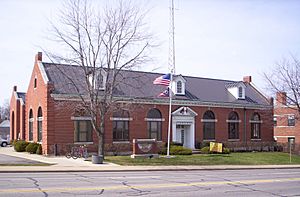 The city is home to Ashland University and Ashland Theological Seminary. Both were established by the Brethren Church—an Evangelical Protestant church in the Anabaptist tradition—which is headquartered in Ashland.

All content from Kiddle encyclopedia articles (including the article images and facts) can be freely used under Attribution-ShareAlike license, unless stated otherwise. Cite this article:
Ashland, Ohio Facts for Kids. Kiddle Encyclopedia.