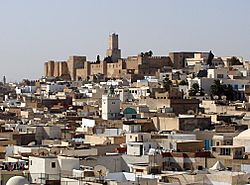 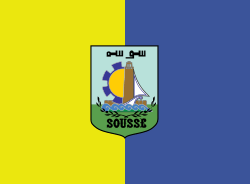 Sousse or Soussa (Arabic: سوسة‎code: ar is deprecated , Berber: Susa) is a city in Tunisia, capital of the Sousse Governorate. It is located 140 kilometres (87 miles) south of the capital Tunis, the city has 271,428 inhabitants (2014). Sousse is in the central-east of the country, on the Gulf of Hammamet, which is a part of the Mediterranean Sea.

All content from Kiddle encyclopedia articles (including the article images and facts) can be freely used under Attribution-ShareAlike license, unless stated otherwise. Cite this article:
Sousse Facts for Kids. Kiddle Encyclopedia.