Larry Dell Alexander (born May 30, 1953) is an American artist, writer and Bible teacher from Dermott, Arkansas. Alexander is best known for his detailed "pen and ink" drawings, and his paintings. He is also known for his painting of a "Clinton Family Portrait" oil painting which he gave to U.S. President Bill Clinton in 1995 while he was still in office. It is now a part of the Clinton Presidential Library permanent collection in Little Rock, Arkansas. He is also known for the popular "Arkansas Schools Tours" that he did in the state of Arkansas from 1996 to 2006 to inspire children to pursue their goals in art and education. As a bible teacher, he has written several bible study books based on New Testament and Old Testament books of the Bible, and has also created many bible related drawings and paintings. In recent years he is perhaps better known for his writings and teachings on the bible

After graduating from Dermott High School in May 1971, Alexander moved to Pine Bluff, Arkansas, where he studied Architecture at Pines Vocational Technical School, which is now Southeast Arkansas College. One of his earliest series of paintings, the "Dermott Series", depicted his childhood memories of growing up in Dermott,Arkansas. Six of those paintings are now a part of the permanent collection at the Arts and Science Center for Southeast Arkansas in Pine Bluff, Arkansas. His career as a professional artist began when he created several lines of greeting cards in 1991. He called his first line of cards "The Expressions Line", but did not trademark the name. As a result, Hallmark Cards now has used the name on a line of their cards since 1997. His greeting cards are not tied to the Hallmark line in any way. Between 1991 and 1994 he created many drawings, including "Renetta", "Girlfriends", "Cowboy Fiddler", "Young Kennedys", and "Roundup". In 1999 Alexander painted his "Detroit Series", a series of paintings of many sites in Detroit, Michigan. The paintings were first shown at the American Black Artist Institute in Detroit. 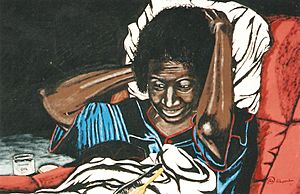 In May 1998 Alexander introduced his "Delta Series", of paintings during his annual "Arkansas Schools Tour". The tour was made bigger that year to include stops in Greenville, Mississippi and Memphis, Tennessee. The "Delta series" included paintings of scenes in the Mississippi Delta region of the United States from Monroe, Louisiana to Memphis, Tennessee. It includes a painting of Graceland, Elvis Presley's former home, the "Greenville Courthouse" in Greenville, Mississippi, a painting of the famous "Beale Street" in Memphis, and his painting of a "Cotton Farm" among others. Alexander's most popular series of drawings, "The Sixties Series" has been shown in schools, libraries, and art galleries in several cities since it was completed in 1993. It is made up of drawings of well known people and events of the 1960s, such as the "Selma to Montgomery marches" of 1965, and drawings of Martin Luther King Jr., Lyndon Johnson, Malcolm X, Medgar Evers and Rosa Parks. This series also has drawings about the Vietnam War. Alexander is also a devout Christian who teaches the bible at his church. He has taught Christianity for several years and he also teaches through his books, and online "Weekly Sunday School Lesson" blog, and his online "Book by Book Bible Study" blog. Alexander and his wife, Patricia, live in Texas. They have four children.

All content from Kiddle encyclopedia articles (including the article images and facts) can be freely used under Attribution-ShareAlike license, unless stated otherwise. Cite this article:
Larry D. Alexander Facts for Kids. Kiddle Encyclopedia.