Daniel Carter "Uncle Dan" Beard (June 21, 1850 – June 11, 1941) was an American illustrator, author, youth leader, and social reformer who founded the Sons of Daniel Boone in 1905, which Beard later merged with the Boy Scouts of America (BSA).

Beard was born in Cincinnati, Ohio, into a family of artists. As a youth, he explored the woods and made sketches of nature. His father was the artist James Henry Beard and his mother was Mary Caroline (Carter) Beard. His uncle was the artist William Holbrook Beard. He lived at 322 East Third Street in Covington, Kentucky near the Licking River, where he learned the stories of Kentucky pioneer life.

He started an early career as an engineer and surveyor. He attended art school in New York City. He wrote a series of articles for St. Nicholas Magazine that later formed the basis for The American Boy's Handy Book. He was a member of the Student Art League, where he met and befriended Ernest Thompson Seton in 1883. He illustrated a number of books for Mark Twain, and for other authors such as Ernest Crosby.

In 1908 while living in Redding, Connecticut, Beard was among those on hand to welcome Mark Twain upon his arrival to the author's new villa Stormfield.

Beard became the editor of Recreation magazine and wrote a monthly column for youth. He founded the Sons of Daniel Boone in 1905, basing it on American frontier traditions. He later moved his column to Woman's Home Companion. After conflicts with a new editor, he moved to the Pictorial Review. Since Women's Home Companion retained the rights to the name, he simply renamed the organization to Boy Pioneers of America. 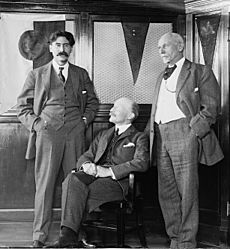 Beard merged his organization into the Boy Scouts of America when it was founded in 1910. Beard became one of the first National Scout Commissioners of the Boy Scouts and served it for 30 years. He later became the editor of Boys' Life magazine, the BSA official magazine, and wrote a monthly column for youth. The work of both Beard and Ernest Thompson Seton are in large part the basis of the Traditional Scouting movement.

Beard also helped his sister organize the Camp Fire Girls. Beard was a Freemason, initiated in the Mariners Lodge No. 67 (New York City). An award for Masonic Scouters has been named in his honor.

B Flushing, New York, which is believed to be one of the oldest continuously chartered Boy Scout Troops in the United States. Beard became an Eagle Scout at the age of 64 on February 15, 1915. 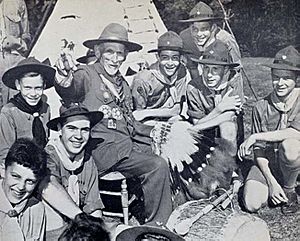 Prior to the establishment of the Distinguished Eagle Scout Award, Dan Beard was recipient of the only "gold Eagle badge" awarded at the Second National Training Conference of Scout Executives held in 1922 in Blue Ridge, North Carolina.

Dan Beard was also involved with the Culver Academies' summer camp program for many years, which used his "Sons of Daniel Boone" program. This program still exists as the Academy's Culver Woodcraft Camp.

Beard died on June 11, 1941, shortly before his 91st birthday at his home Brooklands in Suffern, New York. He was buried near his home at the Brick Church Cemetery in Spring Valley, New York. The National Program Director of the Boy Scouts of America, E. Urner Goodman, was selected to be in charge of the beloved youth leader's funeral in Suffern. An estimated 2,000 people lined the funeral route to the cemetery in Monsey, New York, where 127 Boy Scouts formed an honor guard and assisted with traffic control.

The Dan Beard Council is the administrative body of the BSA in the Greater Cincinnati area.

The Forest Preserves of Cook County, Illinois, has long had a campground called Camp Dan Beard.

Freemasons in the U.S. offer the Daniel Carter Beard Masonic Scouter Award for Masons who are involved with Scouting. The BSA offers the James E. West Fellowship Award; an advanced level is the 1910 Society which in turn includes levels of contributions—the Daniel Carter Beard is recognized for a gift of at least $100,000.

Mount Dan Beard, a 10,082-foot (3,073 m) peak in the Alaska Range near Denali in Denali National Park and Preserve, is named after Beard. 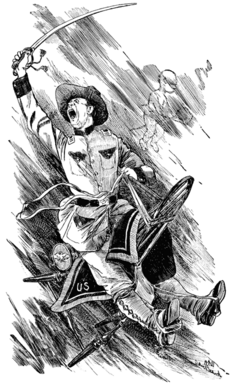 Captain Jinks, Hero, from the 1902 book of the same name by Ernest Crosby, illustrated by Beard 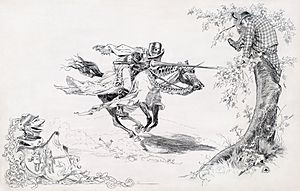 All content from Kiddle encyclopedia articles (including the article images and facts) can be freely used under Attribution-ShareAlike license, unless stated otherwise. Cite this article:
Daniel Carter Beard Facts for Kids. Kiddle Encyclopedia.