Scout Life (formerly Boys' Life) is the monthly magazine of the Boy Scouts of America (BSA). Its target readers are boys and girls between the ages of 6 and 18. The magazine‘s headquarters are in Irving, Texas.

Scout Life is published in two demographic editions. Both editions often had the same cover, but are tuned to the target audience through the inclusion of 16–20 pages of unique content per edition.

The first edition is suitable for the youngest members of Cub Scouting, the 6-to-10-year-old Cub Scouts and first-year Webelos Scouts. The second edition is appropriate for 11-to-18-year-old boys and girls, which includes second-year Webelos through 18-year-old Boy Scouts, Varsity Scouts and Venturers. If the subscription was obtained through registration in the Boy Scouts of America program, the publisher selects the appropriate edition based on the scout's age.

In June 2007, Boys' Life garnered four Distinguished Achievement Awards conferred by the Association of Educational Publishers (AEP), including Periodical of the Year.

The magazine's mascot is Pedro the Mailburro, who answers readers' letters and is the subject of a comic strip. In 2018, the BSA announced a pending title change to reflect the addition of girls to Scouts BSA, the renamed program that now accepts scouts of both sexes. The title change to Scout Life took effect during the publishing of the January 2021 issue. 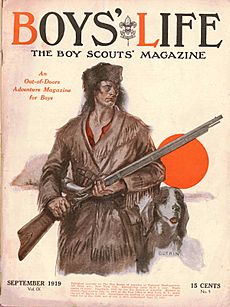 Boys' Life had in 2005 a monthly feature called "BL's Get Fit Guide". Each month highlighted a different aspect of physical health, such as diet, exercise, and drugs. Each month the magazine also features an unusual Boy Scout trip that most Scouts do not normally do. These trips range from a Philmont Scout Ranch adventure to a white water rafting trip.

In both versions, Boys' Life features a video game section, which, in addition to new video game reviews, contains cheats for a video game monthly. They also contain technology updates, as well as book reviews.

Feature columns include Electronics, Entertainment, Fast Facts, History, Hitchin' Rack With Pedro the Mailburro, Think and Grin (jokes page), Science, Scouting Around, and Sports. Two columns, Hobby Hows and Collecting, featured Scouts' own personal hobby tips and collections; Scouts were invited to submit stories for these columns and received $10 if they were chosen for publication.

Pedro is a fictional burro created as a mascot for the magazine. Pedro first appeared in 1947 according to an account in the magazine for June 1961 in which he appeared on the cover. Pedro's official function is "mailburro," and for years, he appeared at the beginning of the letters to the editor column. A short paragraph detailing Pedro's latest "adventure" was decorated with a cartoon version of the beast by cartoonist Reamer Keller. In every issue since 1989, Boys' Life included a column "written" by Pedro that later evolved into a department known as "Hitchin' Rack". Scouts could write a letter addressed to Pedro, and mail it to Irving, Texas, where the Boy Scouts of America (BSA) and Boys' Life magazine were headquartered. Responses would be published in the following edition of the magazine. Through his column, Pedro has given advice on camping gear, camping skills, and how to solve problems within with camping, fishing, backpacking, cooking, etc. The second cartoon was called "The Pedro Patrol". In this comic, Pedro and a group of Boy Scouts taught the readers scouting skills. The comic was discontinued and replaced with "The Wacky Adventures of Pedro." This is a comics section in the magazine, drawn lately by Tom Eagan, then drawn by Tom Eaton, and starting in January 2016, Stephen Gilpin. He also regularly appears in videos and games on the magazine's website.

In 1970, Boys' Life Merchandise created a scarf using the Pedro logo. In the 1990s, Pedro started to appear on T-shirts, sweaters, hats, insignias, etc. Pedro became involved with the Merit Badge Series (the Boy Scouts' award system), showing techniques and tips on how to earn particular badges. This led to "Merit Badge Minute", a new column established in 2010, giving tips for three badges each month.

Artists and photographers who have contributed over the years include Harrison Cady.

Donald Keith's "Time Machine" series of stories appeared between 1959 and 1989. Bobby Fischer wrote the chess column "Checkmate" from 1966 until 1969.

All content from Kiddle encyclopedia articles (including the article images and facts) can be freely used under Attribution-ShareAlike license, unless stated otherwise. Cite this article:
Boys' Life Facts for Kids. Kiddle Encyclopedia.