Marseilles is a city in LaSalle County, Illinois, United States. The population was 5,094 at the 2010 census, and was estimated to be 5,032 by July 2013. It is part of the Ottawa-Peru, IL Micropolitan Statistical Area. 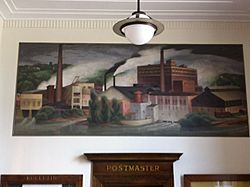 Lovell Kimball arrived at the area along the Illinois River known as the Grand Rapids in 1833 from Watertown, New York. Kimball, aware that the Illinois-Michigan Canal Bill had passed and the canal would eventually reach the rapids, hired a surveyor to lay out a town. Kimball called the town Marseilles in reference to the French city of Marseilles as he hoped it would become a similar industrial center in Illinois. Marseilles was officially platted on June 3, 1835; the plat was revised twice for railroad and canal right-of-ways.

In 1921 the National Biscuit Company (Nabisco) built an eight-story corrugated cardboard box production plant in Marseilles, the largest industrial building in the state (outside of Chicago) at the time, and the first air-conditioned factory in the Midwest. Nabisco was a major employer in the area but ceased production at the plant in 2002.

There were 2,045 households out of which 30.6% had children under the age of 18 living with them, 46.8% were married couples living together, 11.3% had a female householder with no husband present. 29.6% of all households were made up of individuals and 26.0% had someone living alone who was 65 years of age or older. The average household size was 2.45 and the average family size was 3.00.

All content from Kiddle encyclopedia articles (including the article images and facts) can be freely used under Attribution-ShareAlike license, unless stated otherwise. Cite this article:
Marseilles, Illinois Facts for Kids. Kiddle Encyclopedia.