The city acquired the park site in 1984 from the Port of Portland, which had covered much of the peninsula with dredged material from the Columbia River to create places to build terminals. The site was formerly part of Pearcy Island, separated from the mainland by sloughs, one of which was called Pearcy Slough. Pearcy Island still appears on topographical maps at 45°38′33″N 122°45′34″W﻿ / ﻿45.6426163°N 122.7595437°W﻿ / 45.6426163; -122.7595437﻿ (Pearcy Island) even though it is no longer an island. Pearcy Island and Pearcy Slough were named after Nathan Pearcy, who settled a donation land claim on the island in 1850. Development projects later altered the landforms in this vicinity. 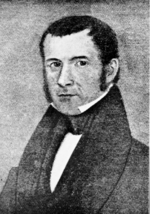 Hall Jackson Kelley, for whom the park is named

The north tip of Pearcy Island had no name until 1926, when a group of Portland citizens persuaded the United States Board on Geographic Names to name it Kelley Point. The name honors Hall Jackson Kelley (1790–1874), a New England resident who during the first half of the 19th century promoted interest in Oregon and the Pacific Northwest. During a brief visit to Oregon in 1834, Kelley tried unsuccessfully to establish a city at the confluence.

Park amenities include a historical site, paved and unpaved paths, picnic tables, public art, restrooms, and a vista point. The 104.16-acre (42.15 ha) park, operated by the Portland Parks & Recreation Department, is open from 6 a.m. to 9 p.m. Kelley Point was once the site of a small lighthouse.

Wildlife includes Bewick's wrens that frequent the park's black cottonwood forest. Caspian terns, osprey, double-crested cormorants, and gulls are common near the rivers. Sights from the vista point include ship traffic on both rivers. An informal Columbia Slough canoe launch lies near the park entrance along Kelley Point Park Road, west of Interstate 5 along North Marine Drive. The 40-Mile Loop hiking and biking trail runs by the entrance to the park.

All content from Kiddle encyclopedia articles (including the article images and facts) can be freely used under Attribution-ShareAlike license, unless stated otherwise. Cite this article:
Kelley Point Park Facts for Kids. Kiddle Encyclopedia.