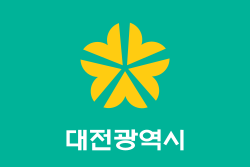 Daejeon (Korean: 대전) is a city in South Korea It is in the middle of the southern Korean peninsula. Daejeon means "a grand field".

Its official name is “Daejeon metropolitan city”. The population in Daejeon is around 1,480,000 people. There are 5 districts (Korean: 구, Gu) in the city.

Daejeon started as a small village called Hanbat. Daejeon started to grow into a large city during the Japanese occupation period. Since the location of Daejeon is near to Seoul, the Ho-Nam train was opened in 1914. In 1949, Daejeon was no longer a part of Chungcheong province. It became an independent metropolitan city. It has the same role as a province.

Today, the city is important as a local self-governing city in Korea. As the population of the city grew, the first subwaystation in Daejeon was opened in 2006. The formal president Noh Mu Hyun once planned to move some of the public administration buildings in Seoul to Daejeon.

Daejeon is seen as a city of science and technology. It has Daedeock science research town, National Science Museum. It was built to support scientists and researchers in Daejeon. In 1993, the city held the Daejeon Expo Festival.

All content from Kiddle encyclopedia articles (including the article images and facts) can be freely used under Attribution-ShareAlike license, unless stated otherwise. Cite this article:
Daejeon Facts for Kids. Kiddle Encyclopedia.