Kim Il-Sung created the Juche political idea. He ran North Korea differently than the Soviet Union and China. There are more than 300 statues of Kim Il-sung in North Korea. 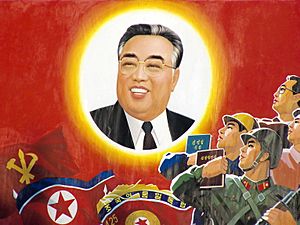 In 1945 after the Soviet Union declared war on Japan, the United States bombed Japan at Hiroshima and Nagasaki severely weakening the Japanese Empire. The Soviet Red Army entered Japanese-Korea and captured Pyongyang with little difficulty.

They made Kim Il-Sung the leader of the North Korean branch of the Korean Communist Party and supplied him with modern Soviet tanks, trucks, arms and artillery for the Korean People's Army (KPA).

The Democratic People's Republic of Korea was declared on September 8, 1948 despite UN resistance. Soviet leader Joseph Stalin installed Kim as leader of the new state. The southern portion of the Korean Peninsula declared itself the Republic of Korea (South Korea) in retaliation. Statues of Kim appeared in North Korea as early as 1949. 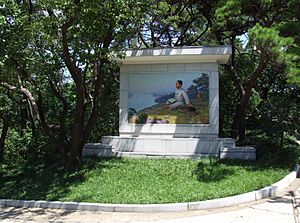 During the early years, North Korea was ahead of its southern neighbour economically; most likely due to Soviet and Chinese aid. Kim installed a centrally-planned Soviet-style command economy. The means of production was controlled by the government and food prices were fixed instead of being allowed to rise and fall like in a market system. Kim Il-Sung formally became leader of North Korea with the establishment of the constitution of the DPRK in 1972 which identified him as President of the republic. 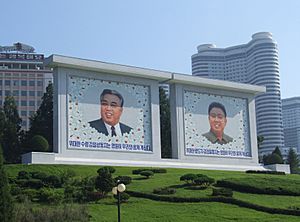 The Soviet Union recognised Kim's regime as having sovereignty over the whole Korea, including the south. It is generally accepted that Kim invaded the south by his own decision and that the Soviets did not influence him. The south was caught completely by surprise when Kim's army invade in the early morning of June 25, 1950.

The newly formed People's Republic of China was at first reluctant to the idea that the Korea would be reunited under Kim's regime but accepted when Kim told them that Stalin approved the invasion. 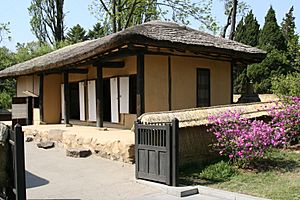 It was put to a UN vote on whether UN forces should attempt to gain control of Korea under democratic rule. The motion was passed since the Soviet Union was not present during the vote. Had the Soviets vetoed the proposal, the UN forces would not have been able to press further into Korea. Eventually UN forces captured Pyongyang and Kim's government was forced to flee north over the Yalu river into China.

The Chinese army mobilised and eventually crossed the Yalu river and fought alongside the KPA and Red Army against US, British and UN forces. Eventually they reached a stalemate since neither force could gain full sovereignty of the peninsula. An armistice was signed on July 27, 1953 ending three years of fighting and established the two sovereign nations of North Korea and South Korea. Since no peace treaty was signed, the two Koreas are technically still in a state of war with each other. 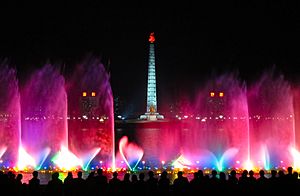 To coincide with Kim Il-Sung's seventieth birthday in 1982, a 170m tall tower called the Juche Tower was built. It was made up from 25, 550 stone blocks; one for each day of Kim's life.

It is a legal requirement to have a portrait of him, along side his son Kim Jong-Il, hanging in ones home. Everyone is issued a special cloth to dust and clean the portraits each day.

In the 1980's a calcium deposit developed on the back of Kim Il-Sung's neck. It swelled up to the size of an orange at its greatest extent. It was quickly determined that an operation to remove it was not possible due to its close proximity to his spine. North Korean reporters were thereafter forbidden to photograph Kim Il-Sung from the right. 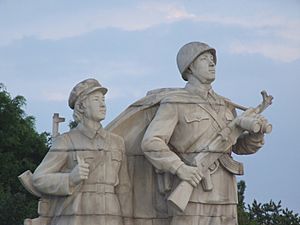 In 1997 with Kim Jong-Il fully consolidating his power after the death of his father, North Korea abandoned the Gregorian calendar that is used in the rest of the world. Instead they use the Juche calendar which starts from the year of Kim Il-Sung's birth (1912) as being year 1. For example, 2015 would be written as Juche 104. To calculate the date in Juche years, simply subtract 1911 from the current year. Dates are often written in North Korea with Juche first; for example: April 12, Juche 104 (2015). 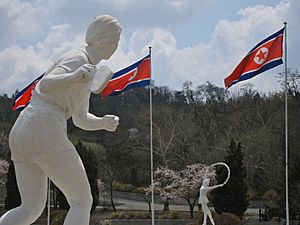 In the early 1990s, North Korea began to experience a famine, labelled as the Great Famine. At the same time the Soviet Union was going through serious economic and social changes as well as suffering a stagnating economy. The Soviets, who had supplied the DPRK with food amongst other things since the late 1940s, began to demand the North Koreans to pay them back; money that the DPRK did not posses. The Soviet Union collapsed in 1991 and food aid stopped almost immediately.

Kim Il-Sung's centrally planned economic system, where the government plans the economic output in advance, proved to be too inflexible to avoid the economic disaster. On the 8th of July 1994, Kim Il-Sung took a heart attack and died shortly afterwards, leaving his country severely bankrupt, malnourished and isolated. 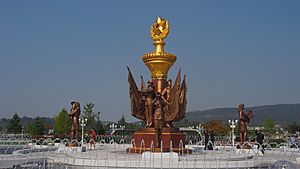 A mourning period was declared after he died and did not officially end until 1997; three years after death. His son, the long-groomed successor, Kim Jong-Il succeeded him as supreme leader of North Korea. Kim Jong-Il did not become President since Il-Sung was given the honorary title of Eternal President. Instead he was named General Secretary of the Central Committee of the Workers' Party of Korea (leader of the ruling party). North Korea is therefore the world's only country that is technically led by a dead man.

State propaganda portrayed Kim Il-Sung as a god to the people and when he died many people felt lost, distressed and confused as many believed that he could not die.

All content from Kiddle encyclopedia articles (including the article images and facts) can be freely used under Attribution-ShareAlike license, unless stated otherwise. Cite this article:
Kim Il-Sung Facts for Kids. Kiddle Encyclopedia.