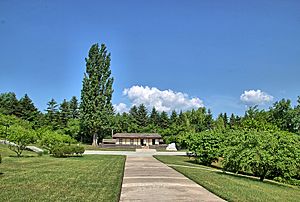 Birthplace of Kim Jong-suk in Hoeryong

Kim Jong-suk was born on December 24, 1917 in Hoeryong County, North Hamgyong Province, Japanese Korea. Kim Jong-suk followed her mother to Manchuria to look for her father, but they discovered that he had already died there. Soon after that, her mother died and she became an orphan.

During this time, Kim Jong-suk worked various odd jobs, was arrested by the Japanese in 1937 in an undercover attempt to secure food and supplies. After her release, she rejoined the guerrillas, where she cooked, sewed, and washed. 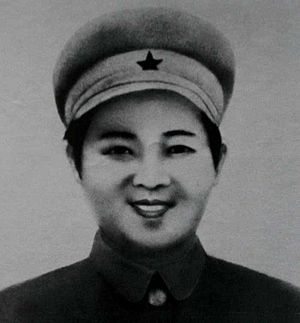 Kim Jong-suk in her youth 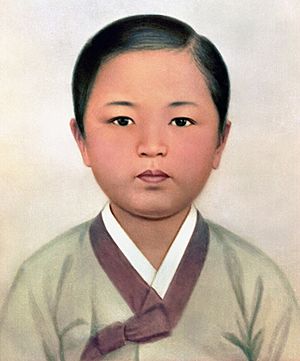 Kim Jong-suk as a young girl

A year after the establishment of the Democratic People’s Republic of Korea (DPRK) and until her death, Kim Jong-suk was the first lady of North Korea. According to some accounts, Kim Jong-suk "was a small, quiet woman, not particularly well educated, but friendly and life-loving." Major General N.G. Lebedev, an executive Soviet officer during the Soviet occupation of North Korea, recalled Kim Jong-suk as "a vivacious and generous lady who always cooked enormous amounts of food for the hungry Soviet generals when they visited Kim’s home." 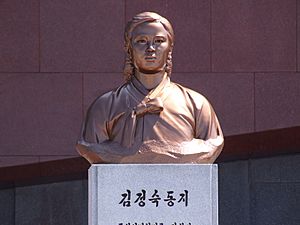 Grave of Kim Jong-suk at the Revolutionary Martyrs' Cemetery

Kim Jong-suk died in Pyongyang in 1949. The official story is that she died from the hardships she had endured during the years as a guerrilla fighter. Her death, however, is omitted from her official biography.

After Kim Jong il succeeded Kim Il Sung, he began to make his mother, Kim Jong-suk, into "a revolutionary immortal." This campaign created Kim Jong-suk as the quiet woman that she was, she became the heroine of the revolution.

Kim Jong-suk was recorded to have "conducted on-the-spot guidance sessions" and was a "great strategist". In her home town of Hoeryong there is a museum, library, statue, square and the house in which she was born devoted to the 'Mother of Korea'". She arranged parachute training and won several shooting competitions.

All content from Kiddle encyclopedia articles (including the article images and facts) can be freely used under Attribution-ShareAlike license, unless stated otherwise. Cite this article:
Kim Jong-suk Facts for Kids. Kiddle Encyclopedia.