Cody is a city in northwest Wyoming and the county seat of Park County, Wyoming, United States. It is named after Colonel William Frederick "Buffalo Bill" Cody for his part in the creation of the original town. The population was 9,520 at the 2010 census. 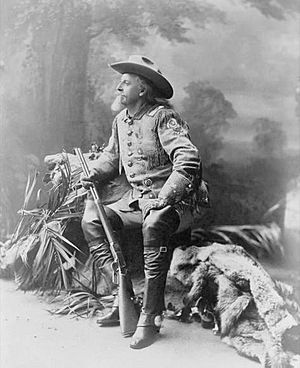 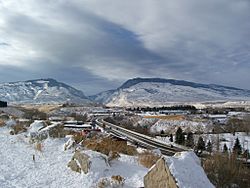 The Shoshone River flows through Cody in a fairly deep canyon. There are four bridges over this river in the Cody vicinity, one at the north edge of town that allows travel to the north, and one about 5 miles (8.0 km) east of Cody that allows passage to Powell and the areas to the north and east. The other two are west of town; one allows access to the East Gate of Yellowstone National Park, and the other is used by fishermen in Shoshone Canyon and as access to the Buffalo Bill Dam.

Cody is located at the western edge of the Bighorn Basin, a depression surrounded by the Big Horn, Owl Creek, Bridger, and Absaroka ranges. At the western edge of Cody, a deep canyon formed by the Shoshone River provides the only passage to Yellowstone's Eastern Entrance. At its mouth and rising above Cody are Rattlesnake Mountain on the north side and Cedar Mountain on the south side. Most of Cody has a spectacular view of Heart Mountain, whose 8,123 ft (2,500 m) peak is 9 miles (14 km) directly north of Cody, and the Carter Mountains, which form a line with peaks at about 12,000 ft (3,700 m), some 15 miles (24 km) to the south.

Cody experiences a semi-arid climate (Köppen BSk), with highly variable conditions. Relative humidity is usually a fairly dry 30% or less. Precipitation averages 10.5 inches or 266.7 millimetres annually, including 42.5 inches or 1.08 metres of snow per season. Due to the aridity, snow cover is highly unreliable, with 27 days per season with 1 inch or 0.025 metres or more on the ground. Cody enjoys about 300 days of sunshine per year.

Wind is almost a constant presence in the Cody area and the Big Horn Basin in general. Air flow in the Basin is turbulent, but during the winter most storms move in from the north-northwest. During the summer, it is not unusual to see storms move in from the southwest. Throughout a normal day, winds can be experienced as coming from almost any direction, mostly from the north and west, but sometimes from the south and east. The Canyon at the west end of Cody funnels rain and wind across the city from the west. The winds can be quite strong at 30 to 40 miles per hour (48 to 64 km/h) and last for several days.

Because of the dry climate, the entire area is laced with irrigation canals, holding ponds, laterals, and drops. The Buffalo Bill Dam between Rattlesnake and Cedar mountains forms a large reservoir about 10 miles (16 km) to the west of Cody. This reservoir (among others) feeds the Shoshone Project, a large irrigation water distribution system. 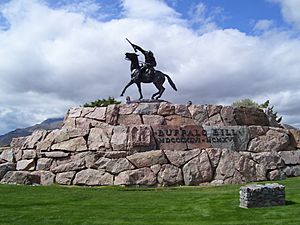 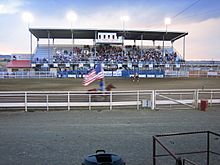 Themes surrounding Cody's pioneer and Cowboy and Western history are common in the cultural events and activities in the area. 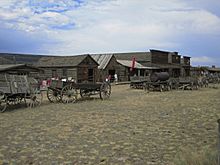 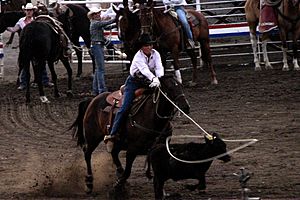 Roping a calf at the Buffalo Bill Cody Stampede Rodeo

Old Trail Town, a restoration of more than twenty-five historic Western buildings and artifacts is located in Cody just off the Yellowstone Highway.

Rodeo is important in the culture in Cody, which calls itself the "Rodeo Capital of the World". The Cody Nite Rodeo is an amateur rodeo every night from June 1 through August 31.

Cody is also host to the Cody Stampede Rodeo. The Stampede is a Professional Rodeo Cowboys Association rodeo and is one of the largest rodeos in the nation that is held over the Independence Day Holiday. Many of the top cowboys in the country attend. The stampede has been held from July 1–4 every year since 1919.

The Cody Firearms Museum has a large collection of American firearms.

Cody is the birthplace of the famous abstract artist Jackson Pollock.

There were 4,278 households of which 26.5% had children under the age of 18 living with them, 45.0% were married couples living together, 9.5% had a female householder with no husband present, 4.0% had a male householder with no wife present, and 41.5% were non-families. 34.8% of all households were made up of individuals and 13.2% had someone living alone who was 65 years of age or older. The average household size was 2.19 and the average family size was 2.82.

There were 3,791 households out of which 29.0% had children under the age of 18 living with them, 50.7% were married couples living together, 9.5% had a female householder with no husband present, and 36.6% were non-families. 32.2% of all households were made up of individuals and 12.4% had someone living alone who was 65 years of age or older. The average household size was 2.27 and the average family size was 2.86.

Cody has three bus transit companies: Cody Over Land Transit, Phidippides Shuttle Service, and LP Transportation. Cody Over Land operates routes within the city of Cody, from June through September. Phidippides is a full service transportation company with service to Cody, Yellowstone National Park, and airports in Cody, Jackson, and Billings. They also have courier and package service available. LP Transportation operates from the Palmer Outpost providing shuttle service to Lovell, and connecting to Black Hills/Arrow Stage (Billings to Denver).

All content from Kiddle encyclopedia articles (including the article images and facts) can be freely used under Attribution-ShareAlike license, unless stated otherwise. Cite this article:
Cody, Wyoming Facts for Kids. Kiddle Encyclopedia.