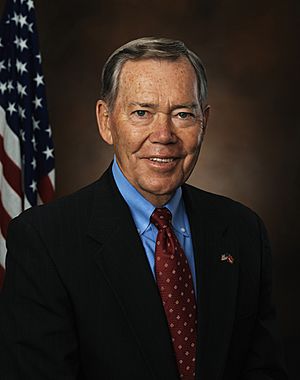 Craig Lyle Thomas; better known as Craig L. Thomas (February 17, 1933 – June 4, 2007) was an American politician. He was a senior U.S. Senator from Wyoming and member of United States Republican Party. Before that he was a member of the United States House of Representatives for Wyoming from 1989 to 1995.

All content from Kiddle encyclopedia articles (including the article images and facts) can be freely used under Attribution-ShareAlike license, unless stated otherwise. Cite this article:
Craig L. Thomas Facts for Kids. Kiddle Encyclopedia.