Jackson is a town in the Jackson Hole valley of Teton County, Wyoming, United States. The population was 10,760 at the 2020 census, up from 9,577 in 2010. It is the largest town in Teton County and its county seat. Jackson is the principal town of the Jackson, WY-ID Micropolitan Statistical Area, which includes Teton County in Wyoming and Teton County in Idaho. The town, often mistakenly called Jackson Hole, derives its name from the valley in which it is located. Jackson is a popular tourist destination due to its proximity to the ski resorts Jackson Hole Mountain, Snow King Mountain, and Grand Targhee, as well as Grand Teton National Park and Yellowstone National Park. 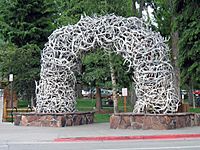 One of the large arches
of shed elk antlers

As of the 2010 Census, The main industries which provide employment are: Arts, entertainment, recreation, accommodation and food services (32.2%), construction (8.7%), retail trade (12.4%), educational services, health care and social assistance (11.9%), and professional, scientific, and management, and administrative and waste management services (11.8%).

A strong local economy, primarily due to tourism, has allowed Jackson to develop a large shopping and eating district, centered on the town square.

Jackson, Wyoming is a very popular tourist town bringing in tourists from all over the country.

Jackson Hole was originally populated by Native American tribes including the Shoshoni, Crow, Blackfeet, Bannock, and Gros Ventre. John Colter entered Jackson Hole during the winter of 1807/1808 during the return journey of the Lewis & Clark expedition. The area became a prime area for trappers and many famous mountain men traveled through the area in the early 1800s. These mountain men are responsible for many of the names in the valley including Bridger, Jedediah Smith, and Sublette. David Jackson gave his name to the valley after a winter spent on the shores of Jackson Lake.

The Town of Jackson was named in 1894. Some of the early buildings remain and can be found throughout the area of the Town Square. The Town of Jackson elected the first all-woman city government (including town council and mayor, who in turn appointed women to town marshall, town clerk and treasurer) in 1920.

The first ski rope tow was built at Teton Pass in 1937 and Snow King Resort was established in 1930. Teton County now has three excellent ski areas including Jackson Hole Mountain Resort in Teton Village, Grand Targhee Ski and Summer Resort located on the West slope of the Tetons, and Snow King Resort.

The Town of Jackson is the county seat of Teton County and the only incorporated municipality in the region. Less than 3% of land in Teton County is privately owned. 97% of the 2,697,000 acres in Teton County are federally or state owned/managed.

In 2009, the Town of Jackson was designated as a Preserve America Community. This designation recognizes that, as a community, the town protects and celebrates its heritage, uses historic assets for economic development and encourages people to experience and appreciate local historic resources.

In September 2016, the town became viral from the ongoing live stream on the YouTube video consisting of various views of the town, especially the one facing the town square. Many comments were made from different users, particularly whenever a red truck is seen on camera.

Jackson is surrounded by the Teton and Gros Ventre mountain ranges. The Teton Range is commonly associated with Jackson Hole and is a popular sightseeing attraction for many visitors. The Gros Ventre Range contrastingly is geologically older than the Tetons and has a much broader width, which encompasses huge expanses of wilderness and is not as easily accessible.

Flat Creek, a tributary of the Snake River, runs through town.

Jackson experiences a humid continental climate (Köppen Dfb). Due to its location in a humid microclimate, Jackson and the rest of the Snake headwaters get considerably more precipitation – much of it snow – than the majority of Wyoming. Its elevation is also responsible for extreme differences between day and night temperatures. Extreme temperatures range from −50 °F or −45.6 °C on January 1, 1979, to 98 °F or 36.7 °C on August 19, 1981, and on average 249.7 mornings fall below freezing and 41.2 of these below 0 °F or −17.8 °C; the average window for zero temperatures is from November 19 to March 12 and freezes can occur in any month. 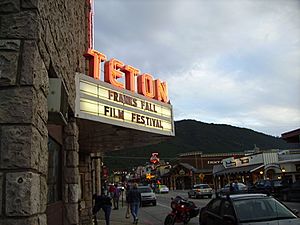 There were 3,964 households, of which 24.7% had children under the age of 18 living with them, 35.2% were married couples living together, 6.6% had a female householder with no husband present, 5.0% had a male householder with no wife present, and 53.1% were non-families. 31.9% of all households were made up of individuals, and 5.3% had someone living alone who was 65 years of age or older. The average household size was 2.39 and the average family size was 3.04.

The town is served by Jackson Hole Airport. A public bus system ("The START Bus", or Southern Teton Area Rapid Transit) services the town of Jackson, the route to Teton Village, and adjacent communities in Star Valley, Wyoming and Teton Valley, Idaho. There are also airport buses to Salt Lake City, and places in between.

As of the 2010 Census, the main industries which provide employment are: arts, entertainment, recreation, accommodation and food services (32.2%), construction (8.7%), retail trade (12.4%), educational services, health care and social assistance (11.9%), and professional, scientific, and management, and administrative and waste management services (11.8%).

A strong local economy, primarily due to tourism, has allowed Jackson to develop a large shopping and eating district characterized by a large number of art galleries, custom jewelers, and designer clothing retailers centered on the town square.

All content from Kiddle encyclopedia articles (including the article images and facts) can be freely used under Attribution-ShareAlike license, unless stated otherwise. Cite this article:
Jackson, Wyoming Facts for Kids. Kiddle Encyclopedia.