Teton County is a county in the U.S. state of Wyoming. As of the 2020 United States Census, the population was 23,331. Its county seat is Jackson. Its west boundary line is also the Wyoming state boundary shared with the state of Idaho.

Teton County contains the Jackson Hole ski area, all of Grand Teton National Park, and 40.4% of Yellowstone National Park's total area, including over 96.6% of its water area (largely in Yellowstone Lake).

Teton County was created February 15, 1921 with land from Lincoln County and organized the following year. The county was named for the Teton Range. The county was created because the inhabitants lived too far away from Kemmerer, the county seat of Lincoln County. The creation of the county required a special act of the Wyoming Legislature, because the area was too poor and had too few people to qualify for county status under the normal requirements. 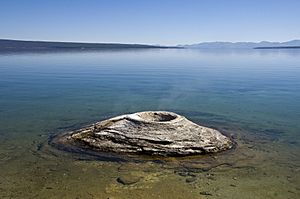 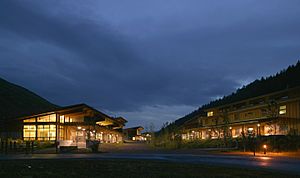 All content from Kiddle encyclopedia articles (including the article images and facts) can be freely used under Attribution-ShareAlike license, unless stated otherwise. Cite this article:
Teton County, Wyoming Facts for Kids. Kiddle Encyclopedia.