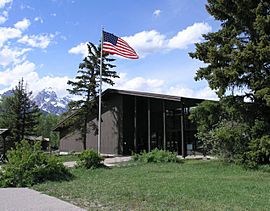 Moose is an unincorporated community in Teton County, Wyoming, United States, in the Jackson Hole valley. It has a US Post Office, with the zip code of 83012. The town is located within Grand Teton National Park along the banks of the Snake River. It is populated mostly by families with inholdings within the borders of the park.

The name Moose can also refer to the small community of Park Service houses located immediately behind the Administration offices. These houses are exclusively inhabited by Park Service employees and their families. The National Park Service maintains the Grand Teton National Park headquarters in Moose, as well as the park visitor center. A local non-profit, the Grand Teton Association, also maintains some facilities in the area to help further the NPS mission. Olaus and Margaret Murie and Olaus' brother Adolph lived in Moose for much of their lives. Today the family ranch is home to the non-profit organization, The Murie Center, whose mission is bringing people together to inspire action that preserves nature, and is administered in partnership with the National Park. The Ranch was designated a National Historic Landmark in 2006.

The residents in Moose are counted as part of the Moose–Wilson Road census-designated place, but most of the residents live on the east side of the Snake River stretching as far south as Jackson Hole Airport, and as far north as Shadow Mountain. Most of the ranches and residences along the Moose–Wilson Road have been turned over to the national park, including John D. Rockefeller, Jr.'s JY Ranch and the Murie Ranch. The commercial area in the community is centered mainly around the shops and restaurants of the Dornan family ranch inholding.

Given its central location in the Jackson Hole valley, Moose has been the setting for several motion pictures, including The Far Horizons in 1955.

All content from Kiddle encyclopedia articles (including the article images and facts) can be freely used under Attribution-ShareAlike license, unless stated otherwise. Cite this article:
Moose, Wyoming Facts for Kids. Kiddle Encyclopedia.