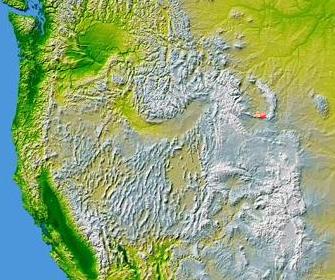 The Bridger Mountains in Wyoming

The range is named after Jim Bridger, who pioneered the Bridger Trail through the mountains from southern Wyoming into the Bighorn Basin in 1864. Bates Creek in the eastern part of the range is was the location of Bates Battlefield a significant battle on July 4, 1874, in which the U.S. Army soldiers from Camp Brown (Today's Fort Washakie) with 167 Shoshone scouts attacked the village of Chief Black Coal (Northern Arapaho), killing at least 34 Northern Arapahos.

All content from Kiddle encyclopedia articles (including the article images and facts) can be freely used under Attribution-ShareAlike license, unless stated otherwise. Cite this article:
Bridger Mountains (Wyoming) Facts for Kids. Kiddle Encyclopedia.