The Crazy Horse Memorial is a mountain monument under construction on privately held land in the Black Hills, in Custer County, South Dakota, United States. It will depict the Oglala Lakota warrior, Crazy Horse, riding a horse and pointing into the distance. The memorial was commissioned by Henry Standing Bear, a Lakota elder, to be sculpted by Korczak Ziolkowski. It is operated by the Crazy Horse Memorial Foundation, a private non-profit organization.

The memorial consists of the mountain carving (monument), the Indian Museum of North America, and the Native American Cultural Center. The monument is being carved out of Thunderhead Mountain, on land considered sacred by some Oglala Lakota, between Custer and Hill City, roughly 17 miles (27 km) from Mount Rushmore. The sculpture's final dimensions are planned to be 641 feet (195 m) wide and 563 feet (172 m) high. The head of Crazy Horse will be 87 feet (27 m) high; by comparison, the heads of the four U.S. Presidents at Mount Rushmore are each 60 feet (18 m) high.

The monument has been in progress since 1948 and is far from completion. If completed, it may become the world's largest sculpture as well as the first non-religious statue to hold this record since 1967 (when it was held by the Soviet monument The Motherland Calls). 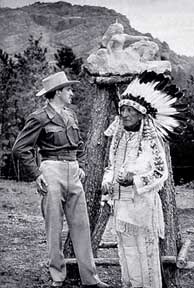 Henry Standing Bear ("Mato Naji"), an Oglala Lakota chief, and well-known statesman and elder in the Native American community, recruited and commissioned Polish-American sculptor Korczak Ziolkowski to build the Crazy Horse Memorial in the Black Hills of South Dakota. In October 1931, Luther Standing Bear, Henry's older brother, wrote sculptor Gutzon Borglum, who was carving the heads of four American presidents at Mount Rushmore. Luther suggested that it would be "most fitting to have the face of Crazy Horse sculpted there. Crazy Horse is the real patriot of the Sioux tribe and the only one worthy to place by the side of Washington and Lincoln." Borglum never replied. Thereafter, Henry Standing Bear began a campaign to have Borglum carve an image of Crazy Horse on Mt. Rushmore. In summer of 1935, Standing Bear, frustrated over the stalled Crazy Horse project, wrote to James H. Cook, a long time friend of Chief Red Cloud's "I am struggling hopelessly with this because I am without funds, no employment and no assistance from any Indian or White."

On November 7, 1939, Henry Standing Bear wrote to the Polish-American sculptor Korczak Ziolkowski, who worked on Mount Rushmore under Gutzon Borglum. He informed the sculptor, "My fellow chiefs and I would like the white man to know that the red man has great heroes, too." Standing Bear also wrote a letter to Undersecretary Oscar Chapman of the Department of the Interior, offering all his own fertile 900 acres in exchange for the barren mountain for the purpose of paying honor to Crazy Horse. The government responded positively, and the National Forest Service, responsible for the land, agreed to grant a permit for the use of the land, with a commission to oversee the project. Standing Bear chose not to seek government funds and relied instead upon influential Americans interested in the welfare of the American Indian to privately fund the project.

In the spring of 1940, Ziolkowski spent three weeks with Standing Bear at Pine Ridge, South Dakota, discussing land ownership issues and learning about Crazy Horse and the Lakota way of life. According to Ziolkowski, "Standing Bear grew very angry when he spoke of the broken Treaty of Fort Laramie (1868). That was the one I'd read about in which the President promised the Black Hills would belong to the Indians forever. I remember how his old eyes flashed out of that dark mahogany face, then he would shake his head and fall silent for a long while." 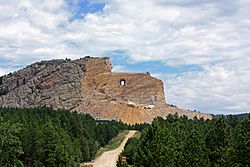 The Crazy Horse Memorial in 2010

The memorial is a non-profit undertaking, and receives no federal or state funding. The Memorial Foundation charges fees for its visitor centers and earns revenue from its gift shops. Ziolkowski reportedly was offered US$10 million for the project from the federal government on two occasions, but he turned the offers down. He felt the project was more than just a mountain carving, and he feared that his plans for the broader educational and cultural goals of the memorial would be overturned by federal involvement.

After Ziolkowski died in 1982, his widow, Ruth Ziolkowski, took charge of the sculpture, overseeing work on the project from the 1980s to the 2010s. Ruth Ziolkowski decided to focus on the completion of Crazy Horse's face first, instead of the horse as her husband had originally planned. She believed that Crazy Horse's face, once completed, would increase the sculpture's draw as a tourist attraction, which would provide additional funding. She also oversaw the staff, which included seven of her children.

Sixteen years later, in 1998, the face of Crazy Horse was completed and dedicated. Ruth Ziolkowski and seven of the Ziolkowskis' 10 children carried on work at the memorial. Ruth's daughter, Monique Ziolkowski, herself a sculptor, modified some of her father's plans to ensure that the weight of the outstretched arm was supported sufficiently. The foundation commissioned reports from two engineering firms in 2009 to help guide completion of the project. Work commenced on the horse after two years of careful planning and measurements. Ruth Ziolkowski died 21 May 2014, aged 87.

The memorial is to be the centerpiece of an educational/cultural center, to include a satellite campus of the University of South Dakota, with a classroom building and residence hall, made possible by a US$2.5 million donation in 2007 from T. Denny Sanford, a philanthropist from Sioux Falls, South Dakota. It is called the University and Medical Training Center for the North American Indian and the Indian Museum of North America. The current visitor complex will anchor the center. Sanford also donated US$5 million to the memorial, to be paid US$1 million a year for five years as matching donations were raised, specifically to further work on the horse's head.

Paul and Donna "Muffy" Christen of Huron, South Dakota, in July 2010, announced they were donating US$5 million in two installments to an endowment to support the operation of the satellite campus. It holds classes in math, English, and American Indian studies courses for college credit, as well as outreach classes. The memorial foundation has awarded more than US$1.2 million in scholarships, with the majority going to Native students within South Dakota. 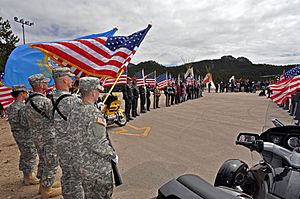 The foundation sponsors Native American cultural events and educational programs. Annually in June, the Memorial hosts a Volksmarch, when the public is permitted on the mountain. Attendance has grown to as many as 15,000.

Much of the earth-moving equipment used is donated by corporations. The work on the monument has been primarily supported by visitor fees, with more than one million people visiting annually. The visitor center contains many pieces of rock blasted from the mountain; visitors may take samples in exchange for a small donation.

The Memorial began its first national fund drive in October 2006. The goal was to raise US$16.5 million by 2011. The first planned project was a US$1.4 million dormitory to house 40 American Indian students who would work as interns at the memorial.

Periodically the memorial publicizes blasting events, which attract thousands of people from all over the region. They may wait for hours as the clock counts down. The gala ends in numerous near-simultaneous detonations, and a great tumbling of rocks and dust down the mountain.

All content from Kiddle encyclopedia articles (including the article images and facts) can be freely used under Attribution-ShareAlike license, unless stated otherwise. Cite this article:
Crazy Horse Memorial Facts for Kids. Kiddle Encyclopedia.