Hill City is the oldest existing city in Pennington County, South Dakota, United States. The population was 948 at the 2010 census. Hill City is located 26 miles (42 km) southwest of Rapid City on State Highway 16 and on U.S. Route 385 that connects Deadwood to Hot Springs. Hill City is known as the "Heart of the Hills" which is derived from its close proximity to both the geographical center of the Black Hills, and the local tourist destinations.

The city has its roots in the Black Hills mining rush of the late 19th century. Tin mining was dominant in the 1880s and led to an influx of capital and people into the area. As the mining industry subsequently waned, tourism and timber became increasingly important to the area. With the establishment of Mount Rushmore in the 1940s, Custer State Park, and the Sturgis Motorcycle Rally, the Black Hills became known as a tourist destination which Hill City benefited from. In recent years the city has diversified to become a center for the arts in the area featuring several art studios and festivals.

Human history in the area that became Hill City, and the greater Black Hills in particular, started by at least 7000 BC. The Arikara arrived by 1500 AD, followed by the Cheyenne, Crow, Kiowa and Pawnee. In the 19th century, the Lakota Sioux claimed the land, calling it Paha Sapa. In 1874, Major General George Armstrong Custer led an expedition into the Black Hills, during which gold was discovered in French Creek, 13 miles (21 km) south of Hill City. The discovery of gold opened the Black Hills, and the Hill City area, to mining. Hill City was first settled by miners in 1876, who referred to the area as Hillyo. This was the second American settlement in the Black Hills. Hill City is the oldest city still in existence in Pennington County. A post office was constructed and opened on November 26, 1877. The city almost became a ghost town when miners relocated to the northern Black Hills after the discovery of gold there.

In 1883, tin was discovered near Hill City, and the population rebounded. The Harney Peak Tin Mining, Milling, and Manufacturing Company made its headquarters on Main Street. The company was backed by English financiers and bought 1,100 prospecting sites around the area. As mining grew, the city became known for its wild living and was once referred to as "a town with a church on each end and a mile of Hell in between." At one time, 15 saloons were located on Main Street. The company built the Harney Peak Hotel on Main Street to entertain its management and executives. Upon realizing the tin market was unsustainable, the company ceased operation in 1902.

Although a small school building was established previously, a main school building was constructed on Main Street in 1921. This school building was replaced in 2001 with the current high school. On July 10, 1939, a fire started 10 miles (16 km) outside of Hill City. Among those who battled the blaze was Hill City High School's entire basketball squad, as well as several teachers and administrators. The United States Forest Service named the school boys one of the best crews who fought the fire. The school team name thus became the Hill City Rangers and was privileged as the only school district in the United States allowed to use Smokey Bear as its official mascot. Hill City was incorporated on March 21, 1945. The Harney Peak Hotel remained in operation until 1934. The building has been restored and is the current location of the Alpine Inn. This building is on the List of Registered Historic Places in South Dakota. The Black Hills Institute of Geological Research opened in 1973 and is involved in the excavation and display of dinosaur and other fossils. In 1992, the institute was engaged in a legal battle over ownership of the Tyrannosaurus rex fossil named "Sue".

This city was one of the filming locations for TNT's 1994 film Lakota Woman: Siege at Wounded Knee. 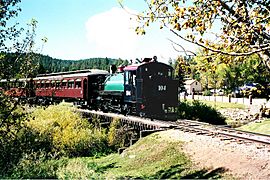 The main railroad lines that intersected Hill City were the Burlington Northern Line (also called the High Line), previously the Grand Island and Wyoming Central, operated by the Chicago, Burlington and Quincy Railroad Company; and the Black Hills Central Line, a spur that extended from Hill City to Keystone. The High Line extended from Edgemont north through Hill City and terminated in Deadwood. This line reached Hill City in 1893, and the Black Hills Central Line was extended and reached Keystone on January 20, 1900. Narrow gauge trolley cars were operated at 45-minute intervals during the day on the High Line. The High Line discontinued its passenger service in 1949 and was fully abandoned in 1983. It is now the George S. Mickelson Trail, after being converted to a bike trail during the 1990s.

There were 394 households of which 33.0% had children under the age of 18 living with them, 49.2% were married couples living together, 7.9% had a female householder with no husband present, 4.8% had a male householder with no wife present, and 38.1% were non-families. 30.7% of all households were made up of individuals and 9.7% had someone living alone who was 65 years of age or older. The average household size was 2.41 and the average family size was 3.05.

There were 298 households out of which 39.3% had children under the age of 18 living with them, 52.3% were married couples living together, 13.1% had a female householder with no husband present, and 28.2% were non-families. 24.5% of all households were made up of individuals and 7.4% had someone living alone who was 65 years of age or older. The average household size was 2.62 and the average family size was 3.11.

Hill City is becoming a center for the Black Hills visual arts community. The Hill City Arts Council oversees the promotion of the arts in the city, Styles highlighted are sculpture in bronze and stone, watercolors, painting, and framing. Native American artwork and jewelry are also prominent.

The Hill City Slickers is a musical group that plays country, folk, and bluegrass music as well as original music. In 2003 they were featured artists with the Black Hills Symphony Orchestra. Thus far they have produced three albums.

Hill City is home to the Black Hills Museum of Natural History, which came out of the vision of the Black Hills Institute for Geological Research. The museum was incorporated in 1992. The collection on display includes dinosaurs, fossil fishes, mammals, birds, reptiles, and fossil invertebrates, as well as gemstones, minerals, and meteorites. The highlight of the collection is the Tyrannosaurus rex specimen named "Stan" which is one of the most compete skeletons unearthed with 65% of the bones unearthed. The museum is also a leading contributor to Hill City's Natural History Days celebration that focuses on fun and education, with guest speakers, and a fossil hunt for children.

Although people of many faiths live in Hill City, five groups have established church buildings in town. These include Assemblies of God, Catholic Church, Lutheran Church–Missouri Synod, Evangelical Lutheran Church in America, and one non-denominational Christian church. 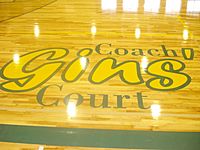 Outdoor Sports popular in the area include hiking, mountain climbing, snowmobiling and dogsled racing. Hill City is the ninth trailhead on the George S. Mickelson Trail that runs from Deadwood, to Edgemont. This trail is often used for running, cycling, and snowmobiling in the winter.

Snowmobiling is also enjoyed in the area with groomed paths running through Hill City and the surrounding Black Hills. There are 350 miles (560 km) of groomed trails in the area. Two snowmobiling magazines have rated the Black Hills as one of the best places to ride in North America.

All content from Kiddle encyclopedia articles (including the article images and facts) can be freely used under Attribution-ShareAlike license, unless stated otherwise. Cite this article:
Hill City, South Dakota Facts for Kids. Kiddle Encyclopedia.