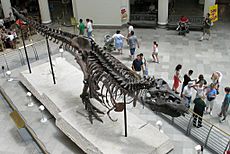 Interesting view from above

"Sue" is the nickname given to FMNH PR 2081, one of the largest, most complete and best preserved Tyrannosaurus rex fossil ever found.

Sue was discovered in the summer of 1990 by Sue Hendrickson, a paleontologist, and was named after her. She contacted the Black Hills Institute, whose staff retrieved and prepared the bones.

First, ownership disputes were settled in court. There was a long dispute between the owners of the land, the Sioux tribe, the United States Department of the Interior, and the Black Hills Institute, whose staff had done the work.

The fossil was then auctioned in October 1997 for US$8.36 million, the highest amount ever paid for a dinosaur fossil.

After preparation, the skeleton became a permanent feature at the Field Museum of Natural History in Chicago, Illinois. The money had been raised by public subscription.

Sue is one of the largest Tyrannosaurus specimens only being exceeded in size by the specimen "Scotty".

Some researchers think the skeleton shows evidence that Sue suffered from the painful condition known as gout.

All content from Kiddle encyclopedia articles (including the article images and facts) can be freely used under Attribution-ShareAlike license, unless stated otherwise. Cite this article:
Sue (dinosaur) Facts for Kids. Kiddle Encyclopedia.