Window Rock's population was 2,712 at the 2010 census. It is estimated to reach around 20,000 during weekdays when tribal offices are open. 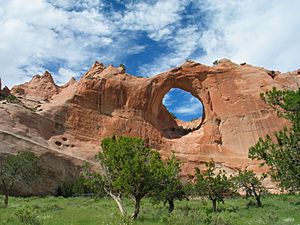 Until 1936, the area was sparsely populated and known only by its ceremonial name Niʼ Ałníiʼgi ("Center of the World"). John Collier, Commissioner of Indian Affairs, chose the site to establish the seat of the Navajo Central Agency. His proposal to make the ceremonial name the official name met with resistance and Navajos soon ridiculed it as "ni ałnííʼgóó" (~ "into your middle (parts)").

Due to this, the name of the major local landmark, the rock-with-hole-through-it (Navajo: tségháhoodzání) was chosen and rendered in English as "Window Rock".

Tségháhoodzání (the Perforated Rock), which is north of the Navajo governmental administration buildings, is important in the traditional Navajo Water Way Ceremony (Tóee). It was one of the four places where Navajo medicine men go with their traditional woven water jugs to get water for the ceremony that is held for the abundance of rainfall.

According to the United States Census Bureau, the Window Rock CDP (census designated place) has a total area of 5.3 square miles (13.7 km2), all land.

The area is atop the Defiance Plateau which encompasses the area.

The greater Window Rock area comprises the Fort Defiance and St. Michaels chapters, the hamlets of Hunter's Point and the Summit, and Tse Bonito on the New Mexico side of the border with Arizona. 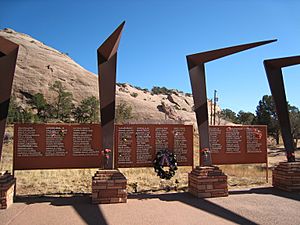 There were 876 households, out of which 51.0% had children under the age of 18 living with them, 43.7% were married couples living together, 29.7% had a female householder with no husband present, and 18.6% were non-families. 15.6% of all households were made up of individuals, and 2.4% had someone living alone who was 65 years of age or older. The average household size was 3.42 and the average family size was 3.81.

Tourism is an integral part of the local economy. Window Rock attracts a large number of tourists and visitors due to its close proximity to many national parks and sites and Navajo government. The area is a popular base of commerce for the regional people as well.

Window Rock is within driving distance to:

The Ch'ihootso Market Place offers many vendors with Navajo arts and crafts along with Hopi, Zuni and local artists. The market place is open from 5:00 am to 6:00 pm Monday through Sunday.

Numerous events are hosted throughout the year in the greater Window Rock area, which includes Fort Defiance and St. Michaels, such as:

Window Rock is served by:

In addition, the Saint Michaels Association for Special Education, Inc. (SMASE) school serves the greater Navajo Nation in Arizona and New Mexico. A non-profit school, founded by Sister Marijane Ryan in 1970 serves as an educational and residential center for individuals with disabilities of all ages.

Local transportation is provided by the Navajo Transit System which operates from Window Rock. It provides several routes that serve the community, the Navajo Nation, the Hopi Nation, and San Juan Southern Paiute Tribe.

All content from Kiddle encyclopedia articles (including the article images and facts) can be freely used under Attribution-ShareAlike license, unless stated otherwise. Cite this article:
Window Rock, Arizona Facts for Kids. Kiddle Encyclopedia.